The Hair Has Left The Building!

They did it! It was wonderful! We really just had a beautiful morning. First I need to clarify a few mistakes I made in my post yesterday. Although the 9th grade was in charge of Pedals for Hope, the entire middle school actually did the bike ride. And it was a 4 day ride, not 3 like I thought. The entire ride was 100 miles, and they were able to commit to 10 miles, 20 miles, 30 miles or 40 miles. We had so many proud students! About 1/3 of the kids committed to the 40 miles...that's 40 miles in one day!

Pixie's grade (K) won the Penny Wars. One of the students' grandparents started saving pennies when their daughter was born 31 years ago, in order to send her to Hawaii when she graduated. She ended up going on that trip, but they never cashed the pennies in, they just kept collecting them. When they heard about Pedals for Hope, they donated all of them to Kindergarten! There were over $400 in pennies from Kindergarten!

The students wanted to pass last year's total of $5400 total raised, and the 9th graders wanted to set a goal of $9,500! The teachers were in a tough spot, not wanting to discourage the students, but also wanting them to be realistic. We are such a small school after all.

I don't think there was a dry eye in the house when one of the 9th graders presented a check to the Cancer Institute for over $10,000! There was so much screaming and jumping around by the 9th graders, they hadn't been told what the final total was, and the last they had heard they were still really short of their goal. 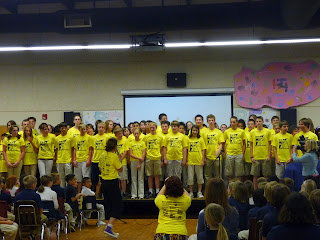 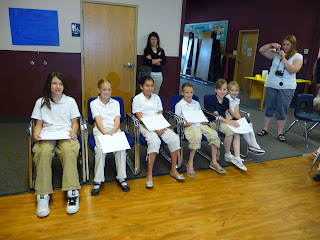 The Hair Donors
My girls are on the far right end.
Note the student on the left end. This is not a girl. This is "Z". Last year he thought the Locks of Love concept was so cool that he decided to grow his hair out for the whole year so he could donate it today!
2 short videos of the locks being chopped! 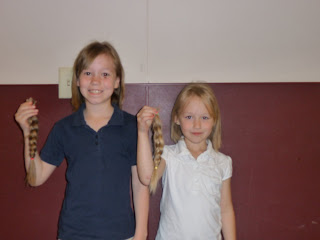 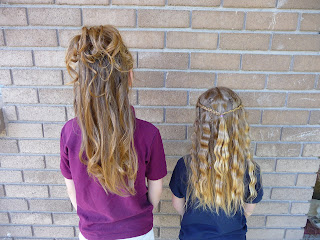 One more shot of before... 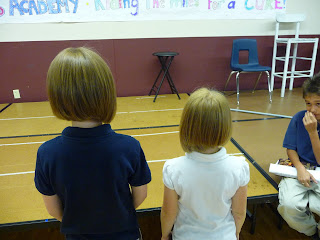 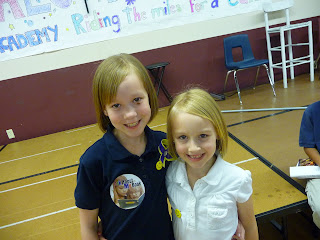 They of course just chopped the ponytail and cleaned it up a bit, no styling or product, so I'm excited to play around with it this weekend and see what fun things we can do!

Cancer has probably touched every one of us in some way. Some of us more than once in our lives. There is something every one of us can do. Small or big we can all make a difference. You can do something as simple as leaving a single comment on my friend JennyKate's blog. Go here to check it out!
Posted by Xazmin at 2:08 PM

That gave me goosebumps just reading about the $10,000!!! That's an amazing accomplishment for those kids!! I bet Pixie was excited that her grade won the Penny Wars! WOW! 31 years of collecting pennies...I can't imagine how many there must have been! So inspirational. Thanks again for mentioning my post!

Your girls look absolutely ADORABLE in the new short hair cuts! They are the cutest!

Hope you guys have a wonderful weekend!

Love their new bobs! That is awesome. What a cool school :)

Made me cry!!! Thanks for sharing, way awesome! I love those girls!!

They look great!! The coolest part is that they can grow their hair long again, but what they cut off today will help another person. :)

They are still smiling after their hair is gone. I think they look great and will enjoy the summer with there new hair.

I have to say I have a lump in my throat! You should be so very proud!

What a great experience for your girls! Your school sounds awesome! I wish it were near me!

Awww! This is really touching and means a lot to me. This is my 2nd year of donating my hair to locks of love. Kudos to your girls! They're making a lot of difference more than they know :)

You must be so amazingly proud of your daughters!! What an incredible gift.

Sounds wonderful! It is so good to see kids do something for a good cause.

So cute and sweet! Your girls look adorable with their new cuts! They should be proud of themselves!

They did a great thing and I bet they are so proud. And their little bob cuts they got after doing it look awesome!

Over ten thousand dollars! That is absolutely inspiring. Kids are amazing, aren't they? (Parents aren't too bad, either). :)

I am SO crying tears of joy! Xazmin, this is so heartwarming and beautiful. I truly wish I could have been there. :)

That is the sweetest thing that your girls did that and even the boy who gave his hair! I want to donate my hair to locks of love but it is so thin so when it gets long it just does not look good. But I really want to try. It is great that so many of the kids committed to riding that many miles!

I forgot to tell you that I left an award for you at my blog. I hope you can actually get to it! LOL!

The new hair-dos are great! So cute :) I've always wanted to do that but am a chicken...maybe one of these days. Right now if they wanted to take 10 inches they would pretty much have to shave my head...
Idaho sounds like fun. Any trip with family is a good one.
Have a great weekend!

that is so awesome!!!! i've got tears in my eyes! we have been touched by breast cancer in our family and recently, i participated in a relay for life. this was a great, great project for your school to do!!!

Wow! That is incredible!

That is great!! How wonderful to have your children invovled in such a worthy project and how great it was such a success. We spent our evening at a fun raiser for cancer as well. It is sponsored by my husband's business partner who lost his daughter to a brain tumor a few years ago. It is so good to have something to do to help others in similar situations, even in a small way.

Tagged you on my blog today for the "What's in Your Purse?" game. Didn't know if you've done that one before or not. :)

How sweet they look. My daughter did the same thing....she had grown her hair her whole life...with only clips....and when she and Brian returned from their honeymoon....she was 21....she gave up a 28 inch ponytail. She was so cute with the short hair she has kept it that way for the past 7 years. Thanks for sharing all the wonderful pictures and the story that went with them.

That is so stinkin' AWESOME! Hooray for them - they totally rock my socks AND they're adorable!

I've been out of it lately (for obvious reasons), so thanks for the update. $10,000 - How awesome is that! I'm so proud of our school and the 9th graders! And look at your brave girls! It is impossible for them to look anything but adorable - with short hair or long. Good for them!

With regard to the amazing amount of work and dedication these kids exhibited... I am humbled and speechless.

What an amazing thing for kids to do!! $400 in pennies is so cool! And those new haircuts are so cute.

You already have so many comments, but I still wanted to tell you how great this is! My daughter grew her hair out to do this a couple of times...the first time she cried when it was done, though. She wasn't sad she did it, just kind of sad about her hair. haha You are a great mom to raise kids who want to make a difference!