Time to link up and confess - I had to get one last post in before the New Year!  Here we go.
I confess...
My New Year's Resolution to blog more in 2011 was an EPIC FAIL!
But I believe in perseverance, so we're going to try again in 2012!
I confess...
Yesterday was my 16 year anniversary, and we went to dinner WAY early (because we hadn't really eaten all day and were starving) and were home before 6, watching a movie with the kids.  We're like 90 year olds in 30-something bodies I guess.
I confess...
I really wouldn't have had it any other way.  We had a great time watching a family movie with the kids, and then sent them to bed and enjoyed a grown-up movie.  A rated PG-13 one people...get your minds out of the gutter!!
I confess...
I lied when I just said I wouldn't have had it any other way.  In a perfect world I would be rich and we would be on a cruise or something for our anniversary.  But I think you all knew my meaning.
I confess....
I have not gotten out of bed before 10 a.m. any day since school got out last Wednesday - except for on Christmas day.  I'm a late-stayer-upper, and a late-sleeper-inner.  That's just how I roll.  Getting back into the 6:30 a.m. swing of things when school gets back in next Wednesday is going to be BRUTAL!
I confess...
This year has been the best Christmas ever. Truly.  I have enjoyed it more, stressed less, felt more joy and love, seen my family truly sacrifice in order to serve others, watched how it affected my children, and felt the spirit of Christ more than ever before. We also slashed several hundred dollars from our immediate family Christmas budget, and saw that our children's joy on Christmas morning was not diminished in the least.  I believe this is due to the way their hearts were touched by serving those less fortunate, and although it was a "lesser" Christmas material-wise than we have ever had, it was a greater Christmas where it counted. 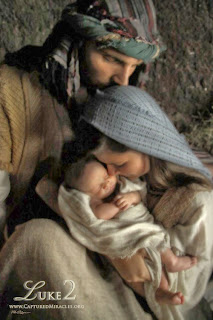 I confess...
I really want my Christmas decor taken down and put away, but I REALLY don't wanna do it!  Have you ever wished you were like Jeannie and could "blink" things done?  I've wished that ever since I was a little girl and was told I couldn't come out of my room until it was clean. 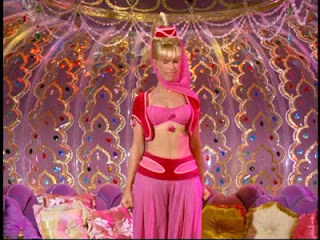 Also I wanted my bedroom to be like the inside of her bottle.  And I still wished I looked that good in a harem-girl costume!
I confess...
This year on my blog, things may get political.  I know that is taboo in blog-land.  But it's an election year y'all.  And I'm a political junkie.  I know those who truly love me will not mind me sharing my opinion on occasion.
And finally - I confess...
I'm super excited to take you on the journey of the room-by-room reorganization and remodel of my home.  I am DETERMINED to get it done this year!  If I'm making this same confession next year at this time, I am selling my house and starting over!!

Remember that confession is good for the soul - so if you'd like, click the button and link up!!
Posted by Xazmin at 5:44 PM 8 comments:

Today I thought I'd link up with my sweet friend Emmy and fellow blogger whom I haven't yet become acquainted with, but am eager to get to know, Kmama.  They host a great meme where we all get to brag about what makes us proud as moms.

I've been meaning to blog about this since last week, so today I'm linking up!  Last week was the culmination of months of rehearsals for the 6-9th graders at our school who were in the school musical.  This year Bookworm landed a lead.  They rehearsed 3 days a week between 2 and 5 hours each day.  With rehearsal, scouts, music lessons and basketball, not to mention just regular school and homework, I saw the stress start to take a toll on my 13 year old.  I always swore I wouldn't be one of those moms whose kids were so overscheduled that they couldn't enjoy life!  But somehow with the basketball season overlapping the musical, and rehearsal times being more often and longer this year - it just sort of snuck up on me, and I found myself to be one of those moms!  I was so grateful the day Bookworm played his last basketball game of the fall season!  I've already determined that if he wants to do the musical again next year, he'll have to take a hiatus from sports until the musical is finished.

To add to the stress, exactly 1 week before opening night, my son lost his voice.  Completely.  And he was waking up every morning with a very sore throat.  Although she handled it very calmly with me, I'm pretty sure Lisa, the director, was in full panic mode upon hearing the news.  She takes the musical very seriously, and the result is always an amazing production that is on a much higher level professionally than a typical middle school musical.  She loaded me up with herbal tea and essential oils to doctor Bookworm's vocal chords throughout the day.  He started to feel better towards the end of the week - but we still had to keep him home because he doesn't know how to shut up, and we couldn't get it through his head that even though he was starting to feel better, he had to COMPLETELY rest his voice!

He went to rehearsals, but was silent, and just acted out his parts while Lisa said his lines and sang his part.  Finally on the last day of rehearsal before opening night he practiced with saying his lines and singing.  Although he made it through, he said that his voice was definitely not all the way back, and it did hurt to sing the higher notes.  Opening night came and right before his solo his head mic went out!  Seriously!  Luckily there were 2 more nights of performances and although he said he still struggled a bit with some of the higher notes, I think he did awesome, and I was so, so very proud. 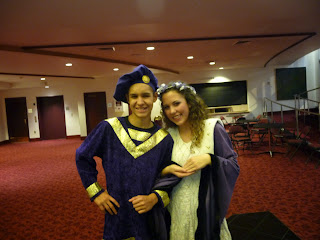 His leading lady was the adorable daughter of one of my good friends and I think they sounded great together, and looked darling!  So there's my proud mom moment.  I really hope he decides to audition again next year...but we will definitely keep the other activities down to a minimum during the months of rehearsing and performing!

I can watch this recording over and over  - even thought the sound of the recording doesn't do the performance justice.  I forgot to mention that before this, I never knew my son could sing.  I mean he sings in church, but he doesn't sing out, and I mean even I sing in church - and I can't sing!  Before this he's only ever really been small parts and in the chorus for the musical.  I was nervous for him performing because he would never sing for me, so I had no idea how he would sound!  Although I admit he's no Josh Groban, I was pleasantly surprised, and as I might have mentioned before - extremely proud.