Yes, yes - it's been a couple of weeks.  I was planning on blogging tomorrow anyway.  But then I saw THIS.  A PINTEREST linky party?  I. could. die.

So the idea of the party?  Link up something you tried that was inspired by something you saw on Pinterest.  Well I'm telling you - I get all sorts of inspiration from Pinterest.  All. Day. Long.  Yeah, no problem in the inspiration department.  It's the motivation department that needs work.  You know, because a lot of hours can be spent being inspired.  Just sayin' - it takes some time.
So here's my pinterest story.  The inspiration: 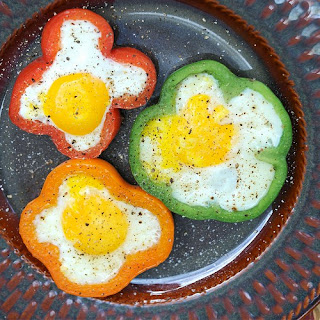 So, instead of  "Liked it, Pinned it, Did it"...my story is more of a "Liked it, Pinned it, Tried it."
Yeah, this totally didn't work.  I followed the directions, sliced my pepper to the correct thickness per the instructions - cracked my eggs into the peppers.  And instead of these tidy, flower-like eggs in peppers, my result was more like, peppers in eggs.  The whites totally did not stay contained within the pepper rings.  They ran all over the bottom of the pan, and the result was just some pepper rings sitting in my pan of fried eggs.
I bet you didn't think I would be linking up a Pinterest fail,  did ya?
Hey - just keepin' it real.  So, I don't know if it's just me, I mean SOMEBODY must have done them right to have them posted to Pinterest, right?  So what do y'all think I did wrong?
Posted by Xazmin at 2:17 PM 10 comments: