This past couple of weeks has been eventful on the school front. I'm fortunate to be able to have my children attend a charter school which I was a part of creating, and starting. It has been a trial and a blessing! But that's a story for another day.

Our school is affiliated with Expeditionary Learning (EL). EL takes the approach of going beyond the walls of the classroom as much as possible. The year is divided into learning expeditions, where every aspect and subject of the learning is related to the topic of study. Fieldwork is a big part of EL. Ideally fieldwork will NOT be just a field trip related to the topic of study, but actually real world application of the concepts taught in class, as they relate to the topic of study. We're still working on this! We're only in our third year, and there is so much to do when starting a school from scratch! Some other, more established EL schools have actually done things like environmental analysis of water samples from a local river, learning and doing everything an environmental analyst would actually do, then presenting their findings to the city's health dept. Or a radon study, where students actually went into the basements of homes in their communities and took radon readings, prepared their findings and published them in an actual science journal, and prepared the steps needed for families to eliminate this risk from their home. Service is also a key component of Expeditionary Learning.

As I said, our fieldwork is gradually becoming more fieldwork and less fieldtrip. But we're not there yet!

Last week Pixie's Kindergarten class visited the natural history museum. Their expedition is on dinosaurs. I liked this fieldwork a lot, because the guy who spoke to them, showing them the fossils and skulls was very good with this age group. He also was (IMO) very respectful of the local religious culture. Sometimes science and religion conflict. For example...the age of the earth. This man was very careful to say things like "a long, long time ago" rather than "billions of years ago". He also always said "we think this, because we've found this" Never "this is the absolute truth". He was very open about the fact that new science is always disproving old science, and explained "we used to believe this, but now we've found this ...so here's what we think now".


It was great...and I think the kids had a wonderful time. Warning...LOTS of pictures to follow. 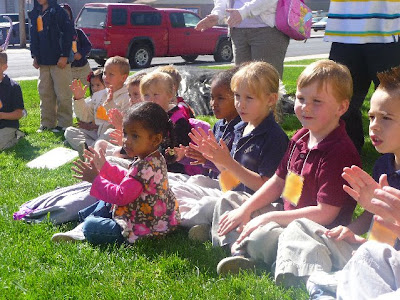 On the grass, passing time while we waited for the museum to open, because we got there early. 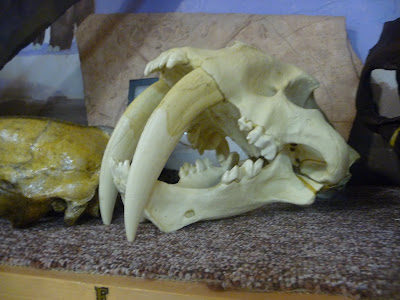 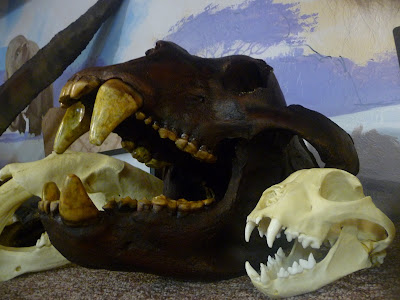 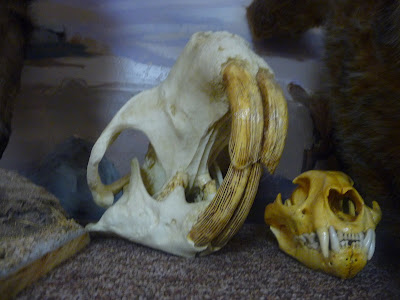 This is what a beaver skull from back then looked like! It's roughly the size of a basketball...just the head! Get a load of those teeth! 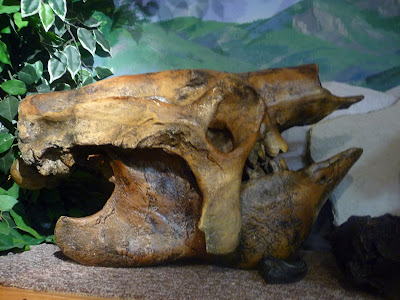 This is the skull of a giant sloth. That thing is about 18" high and 2 feet long! Below Pixie is holding the claw from a giant sloth. 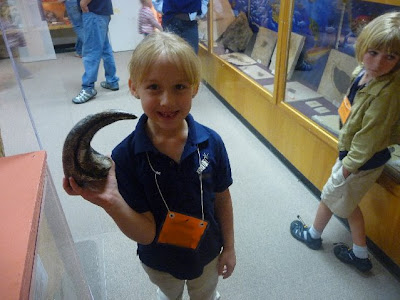 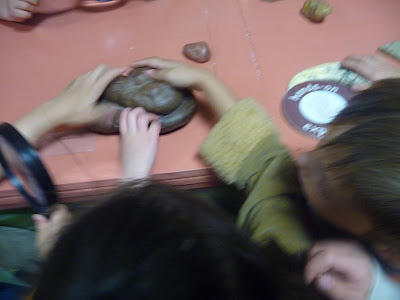 All the kids clamoring to touch the big piece of petrified poo! 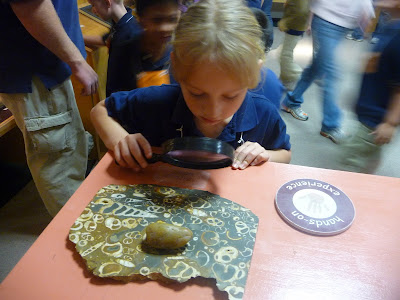 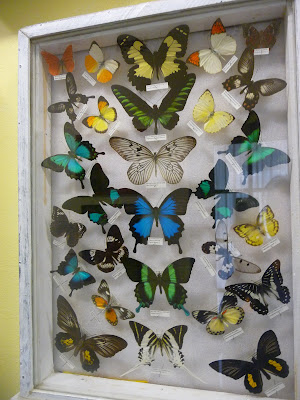 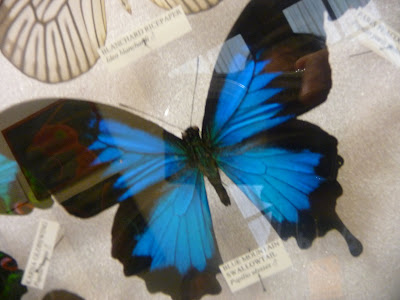 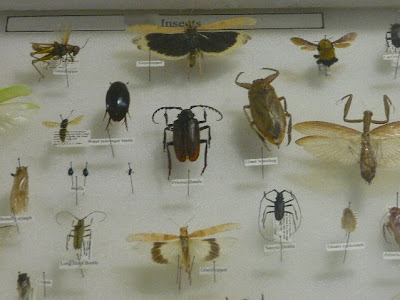 The kids learned about eggs. And how the colors and sizes of the egss are different based on the animals and their environments. Then they were each given a candy dinosaur and a plain white egg. They decorated their eggs based on what they think the egg for their dinosaur would look like. 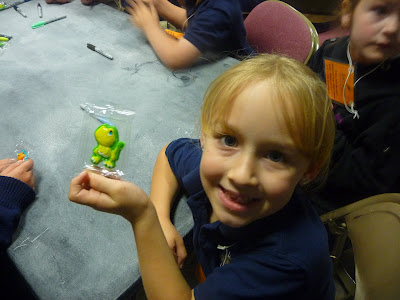 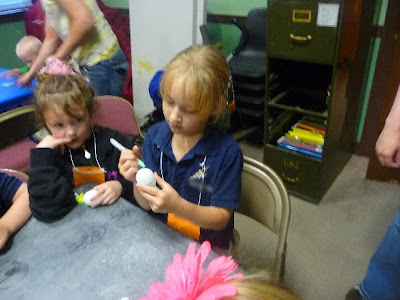 Monkey was allowed to do an egg too! 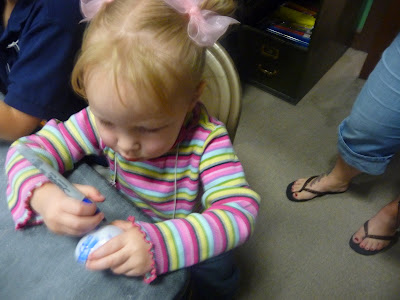 My favorite thing at the museum was the following sign: 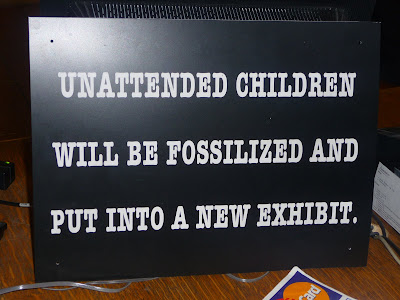 Cowgirl's class is studying Islands. They took it a whole "pirate" direction. They learned how to read maps, and decipher things written in code. They learned about the geology of an island and other fun stuff.
For their fieldwork, they went to a nearby island to hunt pirate treasure! It was an all day excursion. But Hubby said it was definitely very worthwhile! 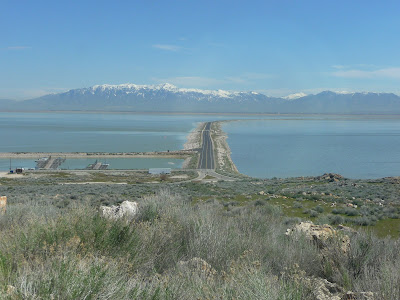 The road leading out to the island. 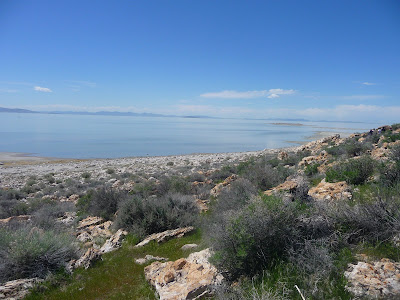 Pictures looking out on the lake. 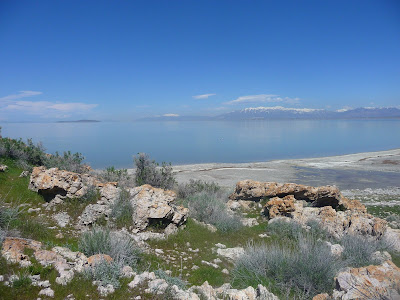 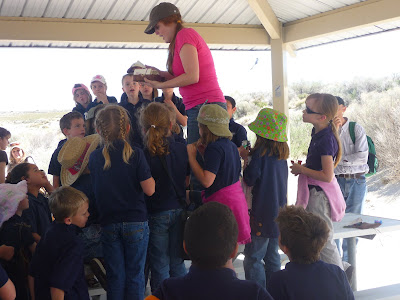 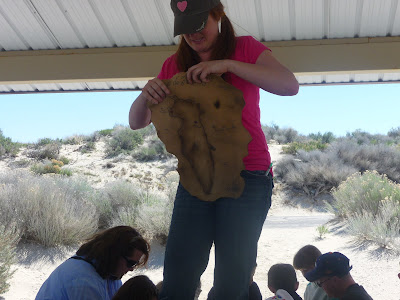 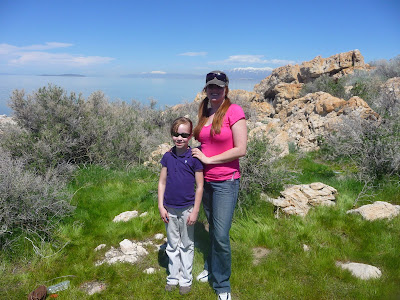 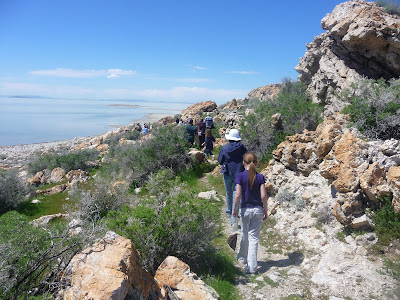 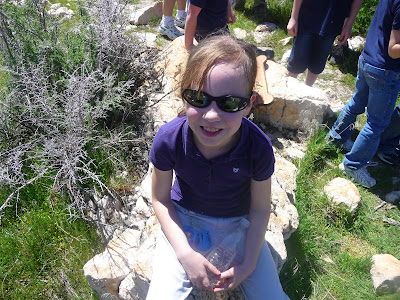 Cowgirls hair was very sad looking by this point. Apparently it was very hot, and there were lots of bugs who are immune to deep woods off! She looked like she had chicken pox along her hairline from all the little bug bites! 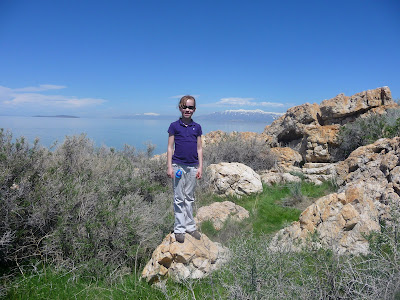 It was a great adventure! Glad daddy went and not me!

“Education is not the filling of a bucket, but the lighting of a fire.”
~William Butler Yeats
.

I love the sign. That would be a rather large exhibit.

I loved the sign! And the butterflies were great!

That is fabulous. How fun. It is so beautiful and educational. Such a great combo. Woo Hooo....

Sounds liks a great school! That was much the approach that I took while homeschooling Rhiannon. She chose to go back to public school though after about 4 months though because she missed her friends.

Wow! That looks like a great experience for both of your girls...and their Momma & Daddy!

What a fun time. I never went on any fun trips like that when I was growing up.

Way to go on being part of something so great!

What awesome trips! That is the best way to learn. (Love the unattended children sign...)

You know what's kinda scary? My mother (Gramma!) is totally into dinosaurs, fossils, etc and she actually has a piece of petrified dino poo. She is so odd, that mom of mine. :)

Wow, how fun! I love hands-on learning. I guess that's why we've decided to homeschool ~ so that we have some control over that.

I LOVE the idea of field "work" instead of just a field"trip"! Was that museum local? My kids would go hog wild over that stuff...all six of them (that's five children and a husband who thinks he's still 8!)

what a great idea!!

What does IMO stand for?

those butterflies are Beautiful! Looks like a fun trip! I ♥ going to the Natural History Museum here in Manhattan.

I love museums!!! We are lucky to live close enough to drive to DC to visit the museums there, but it is annoying to me that the natural history museums present evolution as fact rather than theory. (Not trying to stir up controversy in your comments section, just stating my opinion) ;)

What a cool outing! Sounds like y'all have a fabulous school! Way to go for helping start it.

That is so awesome! I wish there were schools like that here. That's why I homeschool, so my daughter will be able to actually learn through experiencing and not just sitting in a classroom full of 20 something kids.

What a great school. How nice to be able to learn by seeing and doing and not just hearing and reading.

I went to the island when i was in 5th grade...I LOVED it!! I've always wanted to go back and see the bison!!

Oh what fun -- I plan on doing more field trips this year with the kids.
Loved all the picture -- They look like they had a wonderful time.

What a great time! When my kids were little I loved to take them to the Bean Museum down at the Y. It's free and full of amazing stuff. Plus they have Shasta the Liger who used to live at Hogel Zoo when I was little.