So last night we went to Pixie's Celebration of Learning.  It's something we do at our school at the end of an expedition, where the students are able to present in a public forum the things which they have been learning about.  The format varies from one celebration to the next.

Last night the students sang a couple of songs, and presented as an entire grade.  Then we broke off into groups of 3 students, and the visitors that had come to see them, in what is called writer's cafe, which is a method we use a lot in our school.  How writer's cafe works is each writer stands and reads their piece of writing aloud to their small group of peers.  At the end the peers use little sticky notes to give feedback.  Both positive feedback and suggestions for improving the piece.  For the final writer's cafe, where the students were presenting to parents and other visitors, we were asked to use the feedback sticky notes to give a piece of positive feedback to the writers.

We listened to each of the students.  Pixie's story was about a young miner in the town of Alta (former mining town turned ski town in the Wasatch mountains), it was written in the format of a journal that he kept from August, 1873 to February 1874.  It was really very clever.  It was several pages longer than the other 2 students who were presenting, and because at times she let her voice trail off to where we couldn't hear her well, it seemed to get kind of long.  The other students' names were Avy and Weston.

Avy - I rely likd it.
Gus (Weston goes by Gus, not sure why) - Ekselnt (excellent)

I took a picture of the feedback she left for Pixie: 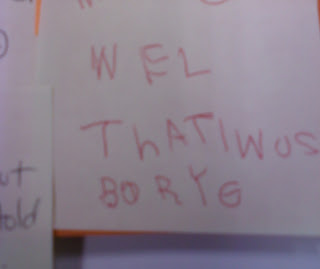 (Well that was boring)
When I chastised her (between fits of laughter) for not being nice she said, "What?  I had to tell her what I really thought."
Where the heck did this kid come from?
Posted by Xazmin at 7:30 AM

Oh. Mah. Gah.
THAT is hilarious! OR! Ekselnt! LOLOLOLOL!
I can't wait to meet that little booger!

Awww...poor Pixie. Did she see the note her sis left? I hope not. That would totally crush me.

Ekselnt! I LOVE that! I absolutely love that writing stage! It's awesome!

Sounds like she is a chip of her mama's block!!! Lol. That is freaking awesome, I love it!

Ok so she is in PreSchool??? What the?? She can sleazy sound out big words like that? Go Monkey!!

i REALLY love this stage of learning. sounding words out and spelling phonetically, seriously awesome.

THAT being said, i hope her spirit wasn't too squashed by the "honest feedback".

Oh my gosh! That is hysterical!! I cannot quit laughing! I love the way she spelled excellent. HA!