Mom Panic, an Anniversary and a Home Victory

So this weekend was packed full of stuff.  Well mostly Saturday.

Saturday was Bookworm's violin federation.  He had 3 pieces to perform in 2 different divisions.  One piece he had down.  But the other 2 he's struggled with.  Mostly due to lack of discipline while practicing.  Not working hard enough on his "trouble spots", and just going through the songs repeatedly, without ever taking enough time to focus on those trouble spots.  Also, he was slow in memorizing his required piece for the Concerto division (each of his pieces were 5-7 pages long).  Students aren't allowed to use their music.  They also aren't allowed to stop and start over.

We went early Saturday morning for a run-through with his accompanist.  It was brutal.  He choked on his concerto piece.  And once he missed something, because he hadn't memorized it early enough to really have whatever was next come naturally, he just froze and couldn't get back on track.  My heart dropped.  He went through it one more time and still didn't get it.  But then we had to leave for the next student who was using the same accompanist.  We went into a separate room so Bookworm could work on his piece.  No matter how many times he tried, he couldn't get it, and just kept getting more and more frustrated.  He was near tears and so was I.  Actually, once we got in the car to drive over to where the federation was being held, I did have some tears slide down my face.  I was sick to my stomach at the thought of him freezing up like that in front of the judges, and a room full of other violinists.  I knew he would be humiliated, and although it would be due to his own lack of discipline, it still made my heart hurt to think about it.

I prayed.  I believe that Heavenly Father helps us out when we have done all we can on our end.  I knew I couldn't ask Heavenly Father to help him play amazingly, because he hadn't put the work in to be able to do so.  But I prayed hard that he would be able to get through his pieces, and that his mistakes would be minimal, and he would be able to quickly recover his place if he lost it.  There had been times when he was practicing that he played them remarkably well.  Just not with the piano.  And since we'd had precious little time to practice with his accompanist, it really threw him off when the piano got added in.  I felt the impression to remind him that it was the accompanist's job to follow him and that he needed to just tune out the piano and go with the flow of what he had practiced all these weeks, and that the accompanist was good enough that he would be able to adapt to him if they got off on the timing.

It worked.  He didn't play perfectly, but he sounded great, and walked away with Superiors from the judges in both divisions.  Huge mom sigh of relief, and determination to pay more attention to his practicing habits before the next Federation!

Saturday was also St. Patrick's Day - which of course you know.  It's never been a day that I cared that much about until last year.  Now it is a special anniversary.  March 17 is the day I met MiMi in real life for the first time.  Still goes down as one of the best days ever!  You should totally read about it, because it was awesome.  I made sure to send a "Happy Anniversary" text so she would know I was remembering our awesome day! 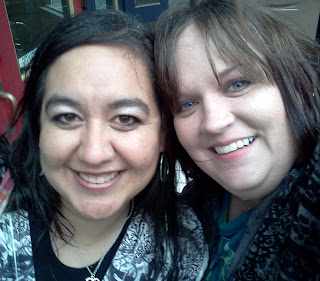 Standing in a downpour outside Voodoo Doughnuts.  Why is my hair more wet?

Then came Saturday night.  You know, the night I've been waiting for, for like EVER?  Or at least since November 6, when RSL's season ended. 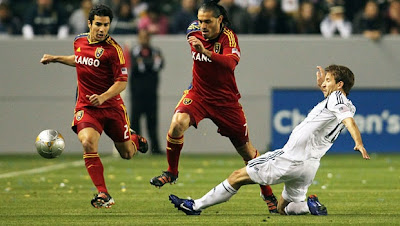 It was the home opener and we got tickets for Christmas and have eagerly awaited our awesome first soccer date of 2012.  And of course my boys didn't disappoint.  The atmosphere was amazing (we have the best fans) and even the rain didn't dampen our spirits as we cheered our team onto victory. 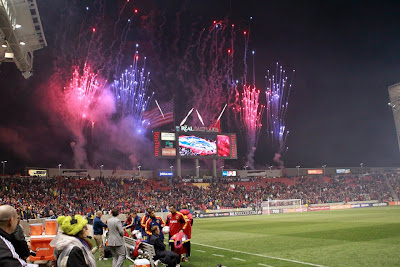 So all in one day I had a near-fatal panic attack, reached a special anniversary, and went on the first of many awesome soccer dates, that will end in victory, of course.

How was your weekend?
Posted by Xazmin at 12:43 AM

I'm going to have to read about you meeting Mimi..I there are so many bloggers I would like to meet one day..except I'm on the east coast and many of you are on the west...you guys don't know what your missing over here :).

So glad bookworm did well, I can imagine being so nervous and scared for my kids!! I can't wait for that day though.

that's awesome! I am glad he played well!! The anniversary when I met my best friend irl {we met through blogging} is coming up! I am going to send her something special

ok i had something to say and then i read MiMi's comment and her anniversary song and died laughing.

i am now breathing again.

performing = stress = character building...you are a good mama and the kid is pretty great too.

LOVE the pic of you and MiMi. i heart that girl.

SOOOO awesome that Bookworm did so well. YAY!!!

TOTALLY didn't remember that March 17th was you & Mimi day. I'll csre more about a certain date in June when we get to meet :)

GO RSL!!! You seriously, SERIOUSLY have GOT to be their biggest fan like Evvah!