Blogging has definitely taught me this!

Last week I had the opportunity to meet a dear blogging friend whom I have considered a real friend since long before we actually met in person!

I went back to try and find the first time I commented on her blog, or she on mine, but then my eyes got tired, and I never figured it out.  Let's just say my friendship with Sami started a couple of years ago when we found each other through blogging, and then you know how it goes - emailing back and forth, exchanging numbers and texting, and finally the actual "voice" interaction!

Our first actual phone call happened because I got her hooked on Hawaii Five-O (through a blog post - what else?), and she needed me to fill her in on the story line because she started watching partway through the first season.  Ahhh... such a tender memory.

ANYWAY... Sami has sort of been on a blogging hiatus as of late, posting a couple of updates, but really not much action in the way of blogging.  So I will let you know that she has been on a "slim-down" journey and has been fabulously successful!  When she first started talking to me about her goals, we sort of "hatched" the plan that her reward for reaching her goal weight could be a trip to Utah to visit!  Her husband agreed and the plan was on!  She would be coming for a week, and stay the first half of the week with Evelyn (another friend she met and got close to through blogging who she got to meet LAST year when Evelyn flew to Texas.  Are you following?) and then stay the last half with me!  And last week was that week!

She flew in Wednesday night, and stayed with Evelyn (whom I actually met a few weeks earlier when she ordered a tutu and bow set for her daughter's birthday and we met to make the "exchange").  Thursday I went to visit at Evelyn's (who actually lives like 90 seconds away from me!) and got to meet Sami in person for the first time!  I'm not going to say I wasn't nervous, but it was so good to finally meet her.  I stayed for a short while because I knew she and Evelyn had plans for their time together.

Then Saturday night the 3 of us met for a girls' night and had such a great time.  So cool that I actually got 2 new friends out of the deal, and one of them lives so close!  After dinner Sami and her luggage came home with me and she stayed until the following Wednesday.  Here's a little run-down of our time together.  I know y'all don't need a play-by-play, but this is my journal too remember!

Saturday night we stayed up way too late talking!  Then Sunday she came to church with us, and afterward we all went to Temple Square (which she has been to before) and saw "Joseph Smith, Prophet of the Restoration" (which she hasn't seen before) at the visitor's center.  We walked around for a bit after and then headed home.  Once again we had a late night chatting.  In fact that was the case pretty much every night.  I was sooo tired when her visit came to an end, but it was so worth it getting the chance to share things with each other, talk and get to know each other and each other's stories so well.

Monday it was shopping day!  Sami's husband had sent her with a new wardrobe allowance because she needed some new threads that actually FIT her rockin' new bod!  So we hit the shopping plaza near my house.  Then I took her to show off my school, because I'm really proud of it, and it's not really MINE, but I like to call it that, and I like to think I had a little bit of a role in it's awesomeness.  We had lunch at the best sandwich shop in the world, and snuck a sandwich in to Tanielle at the hospital, because she had her baby the same day Sami came to stay!!  After picking the kids up from school, we had more shopping to do!  On to the mall!  We tried on awesome (and by awesome I mean insanely crazy) sunglasses, and took pictures of ourselves in tiaras, because we knew it would make MiMi jealous (she wants to be a princess,you know.  With a tiara - in case you've never heard her say that).  I only have one lame picture because the rest are on Sami's phone, and she texted them to me, but then I forgot to save them before my inbox got full and the messages got erased! 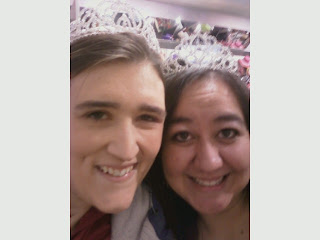 I think the 17 year old working at Claire's thought we were kinda special...but we didn't care!
Sami went home with a fabulous new wardrobe.  I bet her husband was THRILLED when she modeled some of her sassy new threads for him!

After a long day of shopping, it was time for Hawaii Five-O!  After 2 seasons of texting each other back and forth while we were watching, we actually got to watch it together!  It was the bomb-diggity!

And now, because this post is getting soooo long, I'm going to continue it tomorrow.  I hope you come back!!
Posted by Xazmin at 11:57 PM

Sounds like the best weekend! Glad you had so much fun.

sounds like you guys had a great time together.

i let MiMi wear one of my tiaras when she was at my house. i don't remember getting a picture. weird.

So glad you had a great visit. Must admit to being a bit jealous. I so want to meet some of the fabulous ladies I know from blogging.

Awh that is so sweet. Meeting up in person. I can feel your exhaustion from having way too much fun. So happy for both of you. There are so many wonderful bloggers out there.

I took a cell picture of myself in a Tiara at Mama's house!
I LOVE TIARAS!
Special. Short bus special? BOOM. Come bitch at me now.

I love meeting my blog friends in real life! It's the best! It's high time to meet some more, too.

SOOOO awesome that you guys got that time together. I really REALLY want to meet her. I am so upset that last Summer I didn;t suck up the travel lag I was feeling & make the trip to see her when whe was only 4 hours away. Hopefully this Summer I'll get the chance. Just as cool though I am getting to meet YOU in person. YAY!!! Blogging is awesome, when you connect with the right people!

Yes I am miss Sami's blog posts. So happy you had such a great time with her. And so proud of her for meeting her goal!

I was so happy to be apart of the texting of that picture!! Isn't it so fun to meet blogger friends? One day we'll meet too! You know we have a couple of connections! =)

Blogging is wonderful meeting people and making friendships. I hate that everyone lives out west! :)
So glad you were able to make those lasting friendships.