I have a LOT to tell you about my week in Portland. But let's face it, you really just wanna hear about my face to face meet up with the one and only MiMi. So I'll just skip to Thursday.
It was something I have been looking forward to for sooooo long. And there was much preparation to be put into this meeting. I mean, so many things to consider. What will I wear? Shall I wear my hair up, or down? And most importantly - what was I going to do about THIS? 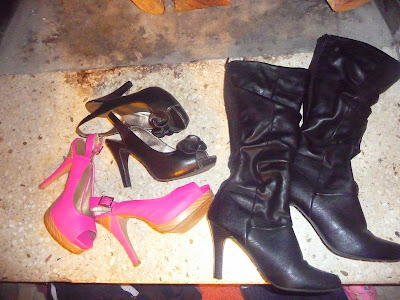 Yes friends, this is the collection of shoes I took to National Conference. I am a high heel girl. I luuuuurve me some sassy high heels. But since MiMi has repeatedly referred to herself as a midget on her blog (which she's not) - I wasn't feeling the desire to be Goliath to her David. So for the first time EVER in life - I bought myself a pair of dress flats. I think they're pretty cute for flats. I wore them the first time on Tuesday when we flew into Portland. I could not get used to them! So once we were checked in - I switched to heels before going out to dinner! And on Thursday I wore heels until lunch break, and then switched to the flats in preparation for meeting MiMi!
Anysidetrack....Thursday was the day. I could NOT focus! I had class from 8-12:30, then again from 2:30-4:30. I was twitchy and tapping my pencil, and shhhh...don't tell, but I pretty much just texted with MiMi through most of my afternoon class!
Then it was time! I went down to the lobby, and was waiting for her to come up in the elevator. So I stood by the elevators, and was chatting with a couple of school friends. I kept glancing over at the elevators, watching for her. Somehow I TOTALLY missed her. So what did she do? Just stood there - watching me jabber away, waiting to see how long it would take me to notice her. Mean, huh? I felt like such a dweeb.
We hugged...we laughed...we wedged ourselves into the elevator with the bajillion other people from the conference (seriously 23 floors, and 800 people attending the conference and FOUR elevators? Yeah - that was special). We went up to my room because I had a gift up there for her, and look what she gave me! She is seriously the sweetest. And she is soooo pretty! 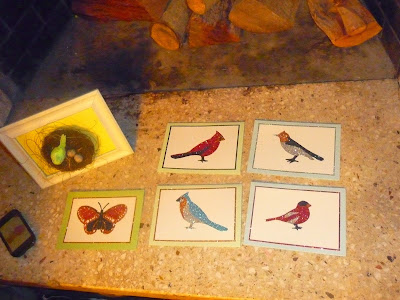 These cards she made me are seriously GORGEOUS! I wish I could show how colorful and sparkly they are - she knows how I love my glitter! 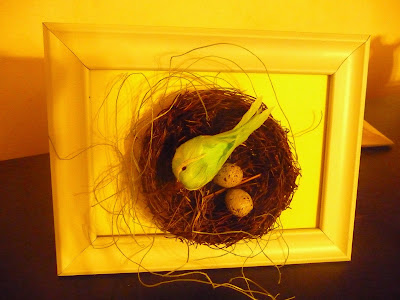 I'm angry that I can't get a good picture of this - my house is just too dark. But isn't it adorable? I love it!
We stayed in the room chatting for a bit - and it was seriously like I have always known her. At least that's how it felt to me.
Then off to our adventure! It started right off the bat when we had to do a 75 point turn just to get up the ramp from the hotel parking. I am not kidding you - you have never seen a parking garage exit ramp with a sharper turn. There were scuff marks all around the curve where people had scraped their cars trying to get out! But my girl MiMi did it without any scuffs! It only took us like 17 minutes!
Our first objective was to find Voodoo Doughnuts which was supposedly 0 .8 miles from my hotel. MiMi and I have an inside joke about Voodoo, and how voodoo people creep us out. We talk incessantly about voodoo people - so when she learned I was coming she said we HAD to go to Voodoo Doughnuts! And guess what? It's actually owned by REAL voodoo people - yikes!
We braved the Portland streets and despite her warnings - MiMi's mouth was actually very well-behaved! We couldn't find the freakin' shop! We did nearly hit a pedestrian - then had a pedestrian nearly hit US. Both men gave us dirty looks that I felt were completely undeserved. Whatever.
We were honked at by a bus, just because we were driving in the "bus-only" lane. Whatever again.
We finally found the dang place, and had to pay EIGHT DOLLARS to park in the stupid parking lot across the street. As soon as we stepped out of the car...downpour! As soon as we got to the edge of the parking lot and were about to cross the street...HAIL! So we stood out in the pouring rain/hail and waited for our turn in the creepy voodoo shop. 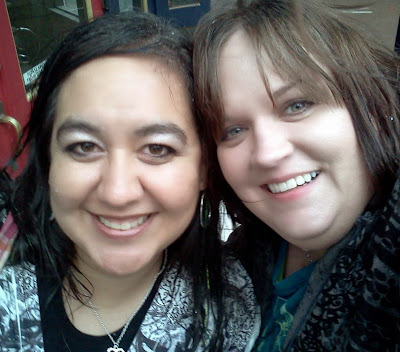 I guess hair up or down was a pretty irrelevant question at this point.
Once inside MiMi struck up a nice conversation with the lovely young couple in front of us about herpes. Yes that's right friends - I said herpes. Okay - it was funny, we were talking about how gross the store was, and how if you accidentally touched your mouth on the ginormous donut on the wall that everyone was pretending to eat - that you would walk out with herpes. But it was still really funny to hear her repeatedly say "herpes" in a store jam-packed with people.
After donuts we drove around a little bit, and discussed serial killers. In all the TV shows the serial killers are always in Portland and Seattle. We talked about the Green River Killer, and pointed out people who could potentially be the GRK - there were some SCARY folks out that night! MiMi also introduced me to a game called "gay or not gay"...I'll let her tell you about that. I then told her about "make-out or not make-out". If you have any imagination - you can probably figure out the rules to either or both of these games.
We headed out of town, and looked for a place to have dinner. We may or may not have driven past the same shopping plaza 3 or 4 times while trying to figure out where we were. We also may or may not have gone through a huge dip at full speed, bottomed out so hard that we hit our heads on the ceiling, and then smelled oil, and had to pull over to check under the car for leaking fluids. We also may or may not have been laughing hysterically the whole time.
We finally found our restaurant, went in, had tasty food and chatted for hours about anything and everything while everyone around us got drunk on green beer.
I think we were both reluctant to leave. I know I was. In fact, if we both hadn't had to pee so bad, I'm not sure we would have left when we did. Once back at the hotel, we still sat down in the lobby and talked until nearly 2 in the morning. Then the worst part of the week happened. I had to say goodbye. It really was one of the best nights of my life. It was so worth it, conquering my fear of flying, wearing flat shoes, leaving my family for the first time ever.
Thank you MiMi. Thank you for taking the time to drive into Portland and take me around, and for spending the evening with me and for being my hilarious, sweet, wonderful friend. I love you! I'm still sorta mad that your post is much funnier than mine though!
Posted by Xazmin at 12:00 AM

Glad you had such a good time. It was fun to read about your evening.

Looks like you guys had a blast. I am NOT a high heeled girl. I can't walk in the things to save my life. I am a Yellow Box girl. Just give me some flip flops or sandals and I am good to go.

I'm so happy for both of you, meeting bloggy friends is so wonderful and really only something
another blogger can understand.

You're so kind, I would have left my heels on!

That sounds so fun!!! I want to meet both of you someday. Heels in PDX can sometimes be tricky.
What restaurant did you go to?
(See? I can jabber too...)

Your post is HILARIOUS!!! I'm laughing out loud for reals!!!
Seriously. Best. Night. Ever.
LOL!!!

Okay...herpes. Yeah, I guess I am the one who started the herpes thing. I always forget the stupid stuff that comes out of my mouth! lol!

What's really funny is that we both said it took 70 something turns to get out of the dang parking garage! Thanks for blaming it on the sharp curve and not me.
You check is in the mail!

Any friend of Mimers is a friend of mine. You two had so much fun! I love it!

OH...and HOW did you walk in those shoes?


I've bought a couple pairs of stilettos and they kill my feet! Please tell me your trick!

Coming by from MiMi's! What a great time the two of you had!

I am laughing SO hard that I seriously have a tear in my eye...SERIOUSLY! I wanna play with you guys, I'm funny too I promise, although I don't think my potty mouth is as controlled as Mimi's is. Sounds like you guys had THE BEST time... YAY!!! :)

I am completely jealous and seriously pouting right now. I WANT TO HANG OUT WITH YOU TWO! it sounds like you had a fun time without me and that just breaks my heart. How could someone have so much fun WITHOUT ME? I bring the F-U-N.

I've been bitten by the green eyed monster.
I'm totally NOT going to tell you I hate you again on your blog, so don't worry.
Next time I'm going through SLC, you better be ready to show me a good time!
(and I totally meant that a lot more innocent than it sounded...)

Don't tell MiMi but I enjoyed reading your recap just as much ;)

So glad you two had so much fun

Yep still jealous! But happy for you guys because I know how much fun you both had!

I loved reading this..sounds like you two had a blast, and now I have some game ideas to play with friends the next time we're out and about LOL....Make out or not make out! Gay or not gay! You two are cracking me up!

Now I have to go read Mimi's post about you two meeting UP!