Braggin' on my Boy

Yesterday my baby boy turned 11! Can you believe it? I'm not old enough to have an 11 year old! Really...I'm not! I wanted to take today to throw "humble" out the window and brag on my boy!

I can't believe how the time has flown. Bookworm is my firstborn...do all you moms remember how OVERWHELMING first time motherhood is? While we were in the hospital, he began exremely rapid breathing...so fast that the doctors thought he may have an infection and did routine treatment. I was NOT pleased with my hospital experience. I felt the hospital staff was unprofessional, and at times down right rude! But that's a post for another day.

After 2 spinal taps, and 3 days of antibiotics being administered via IV, they finally decided to let us go home. They put IV lines in my baby boy's head and leg...then wrapped him all up to make sure the IV's stayed in. We were to continue the doses for 6 more days at home. It was very traumatic!

When I came to the nursery to get him in his little car seat...this is the sight I saw. Except they also had his head all wrapped up in a bandage. After a nerve-wracking 3 days of worrying about my baby boy, the sight of an IV line in his head, and his leg, and him all wrapped up like a mummy brought me to tears. The idiot nurse (who was not a mother) had the nerve to say to me..."why are you crying?" in a very condescending voice. I hated her. 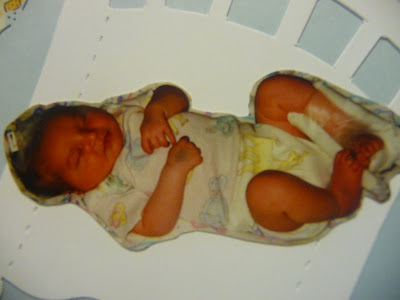 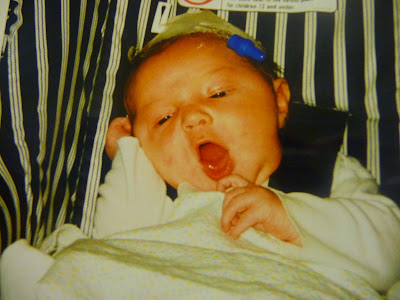 Here he is in his car seat all ready for his first car ride. Which he hated. And every car ride after that for the 1st year. He would scream his full head off the ENTIRE TIME! But we were so in love with this little guy. Exhausted, but in love. It turned out that he had NOTHING wrong. At all. All that trauma for nothing!

I snapped some shots of a few of my favorite scrapbook pictures to give you a brief glimpse of his life. 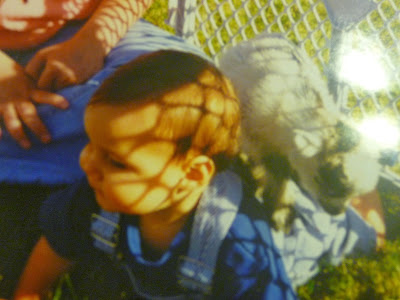 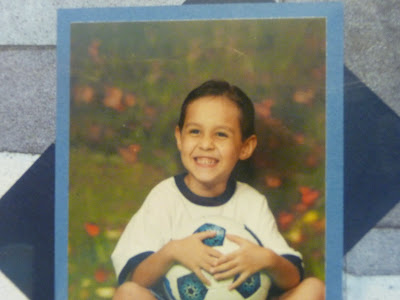 Bookworm at age 5
When he was 9, Bookworm got a camera (kid's version...nothing fancy) for Christmas. He happens to be a very talented artist, and he decided he wanted to make a "how to draw" book. He took pictures in the various stages of completion of pictures he was drawing. Here is his "How to draw a Tiger" sequence. 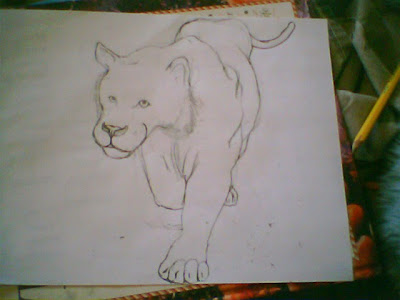 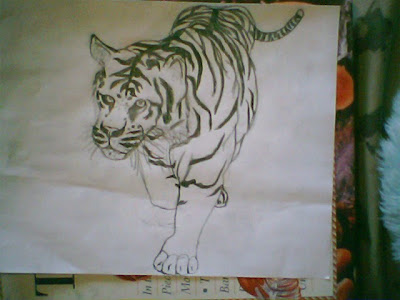 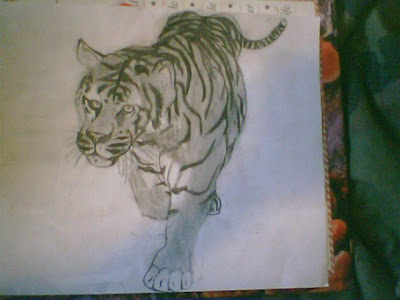 Yep, 9 years old. I'm so proud of how hard he works to develop his talents. He's also works really hard on his violin playing ability...I posted a video here. 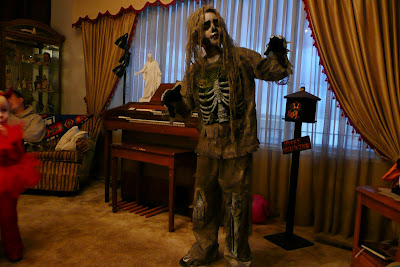 Last halloween...one of my favorite costumes of his!

Last week Bookworm was awarded his Arrow of Light in Cub Scouts. I'm sorry the pictures didn't turn out great...the camera was on the wrong setting, so they are kinda blurry. But they're all I've got of that night, so they'll have to do! 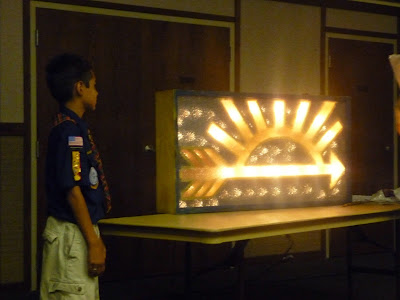 This cool light display is used in the Arrow of Light Ceremony, each light ray at the top stands for a different cub scout virtue, and they turn the rays on one by one as they describe what each one stands for. It's really cool. 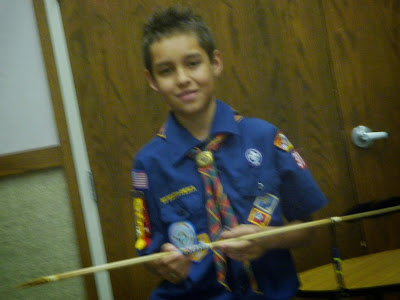 Bookworms Cub Masters hand made this cool Arrow and presented it to him along with his Arrow of Light Badge. I thought is was such a thoughtful gesture, and he will have it to remember this experience for the rest of his life.

Yesterday was a fun family day. We opened presents, then I made Bookworm's requested breakfast: Stuffed French toast with Grandma's homemade strawberry syrup. Bookworm had to cancel his bowling plans with a friend due to the fact that although he feels okay, he's still coughing up a storm from being sick, and we couldn't be coughing all over everyone!

But last night my parents and brothers and new SIL came over for a BBQ, and combined celebration. My mom's b-day was last week, so we were celebrating her as well!
I saw this idea for hamburger cupcakes at Bakerella and had to try it for our Birthday BBQ! I love how they turned out, but my french fries were a bomb, so they ended up in the garbage! 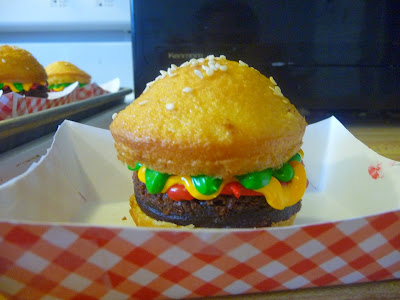 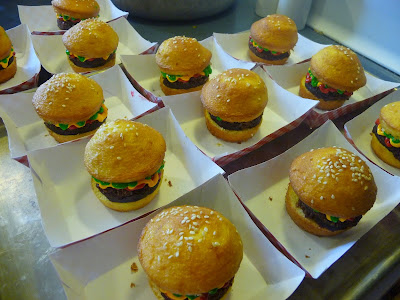 They were a hit, and we had a wonderful time with our family! 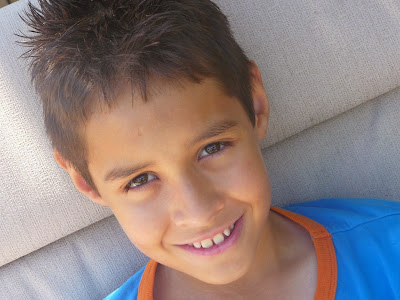 Don't forget to keep linking up your awesome projects to Mod Podg Mania...even if you don't have something to link up, make sure to check out what everyone else has been up to!

Happy Birthday, Bookworm!!! He is so cute!! He seems like such a good kid!

I love LOVE love the hamburger cupcakes! They look so real! Awesome!

Happy birthday to your bookworm such a handsome boy! What cute pictures! And those cupcakes are adorable!

Happy Birthday, Bookworm! He's adorable and so talented too!

Those are awesome cupcakes!

thanks for your nice comments! those burgers look delish...i might have to have a bbq JUST so i can make them!

Great tribute to a terrific young man. His grandma is so proud of him and his talents. In fact he is my most favorite grandson!!!!!

Happy Birthday to such a cute Young Man. A lot of credit goes to a good mom.

Have a great day.
Sandra

What a sweetie! I had a VERY similar experience with my second...week-long NICU stay for Michaela Byrd (we still don't know why, they never told us), rude doctors in the NICU, etc.

Oh Happy Birthday to your little boy I love your cupcakes they turned out great!

What a great post -- how lucky he is to have a mama who adores him so much! He is incredibly talented, and after seeing your cupcakes, there is no guess where his talent comes from!

Your baby is gorgeous! And, yes, I said baby, cuz he'll always be your baby.
And he's SO talented! Music? Check. Art? Double check. Cuteness?? Triple check. You better watch out momma, one of these days you'll have to beat the girls off with a stick!
And also, I was thinking, I'll send you some abelskivers if you send me a hamburger...?
: )
Macey

Aww..he is so sweet!! And what a sweet tribute to him from you. How could you NOT be so in love with him? THere is something special about your first born.....

LOVE the hamburger cupcakes. Were they hard to do?? I think they are adorable!!

Happy birthday to your boy!!! Those cupcakes are SO SO cute!!!!

Happy Birthday what a handsome little boy you have R should I say big boy.

awww... he's handsome boy. i love how you posted his baby pics. so sweet... I think my mom lost mine. ha!