Since I'm sad about missing my concert, I think I should totally win Shawn's Dog Lover's Giveaway. Don't you think? 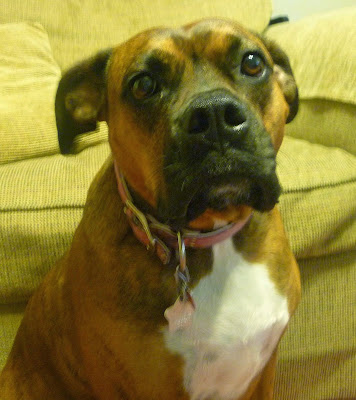 Yes I know Ty is a dumb name for a girl dog. She was a year old when we got her, and she knew her name, so we didn't think we should change it on her. Want to know what's even dumber? Ty is short for Tyrant. Who names a female dog Tyrant? Especially a female dog who is extremely gentle with kids, loves everyone, and actually cowers under the piano bench, trembling when she gets in trouble? Dumb I say.

This is Ty laying in her bed. See how well she doesn't fit? 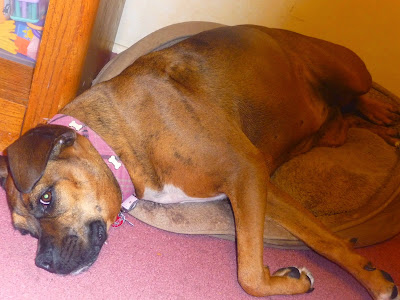 Now we're not horrible people...she's had 2 other beds that were large enough to fit her. She never used them. She always curled up in a ball on a pile of dirty laundry, or a blanket the kids left out. Like a tiny tight little ball. When hubby came home with this she curled up in it and it was hers. She has since started laying more sprawled out, but still uses this thing. It's kinda funny, but kinda sad.

I didn't want a dog. We've tried that before, and although I'm not an animal hater, and I grew up with dogs, I just didn't want to be bothered with another thing that I had to take care of. Plus... dogs smell. They just do...I'm sorry.

But hubby saw an ad that the family she was with needed to find her a new home because of their landlord, and he REALLY wanted her. I said "no". He showed up with her one night and it's now been 18 months....I guess she's staying.

Ty's not allowed on the couches. I soooo don't want to be that family that smells like a dog, and has dog hair all over them whenever they go anywhere. Or that house where people are afraid to sit on the furniture because they know they'll stand up with hair all over them. Ty doesn't understand this and when we are gone, she makes herself comfortable on the couch. Sometimes she even sneaks up there at nighttime when we're all asleep. Of course as soon as she's caught she jumps down and runs underneath the aforementioned piano bench and cowers down pathetically as if we're going to beat her or something. Which, by the way, we don't...in case you were worried.

The thing is I REALLY hate when there is dog-smell, or dog hair on the couch. Like seriously so much that I have actually considered finding her a different home. But I just can't bring myself to do it. She is sweet, and so good with children, but she's a big enough dog to be intimidating...I always bring her to the door with me when I'm alone and someone I'm not expecting knocks. Kinda like...if you're a bad guy, well I have a big dog so there. Plus I'm alone most nights with the kids, and I love the security I feel having her there with us. Okay, I admit it, as much as I don't want to be a dog owner...I've grown kind of attached.

She is here to stay, but I need a solution for her incurable couch-sleeping! I think Shawn has found the answer for me at Bedroomfurniture.com ...go here to check it out. But don't enter...because I need this!

What about you? Are you a dog person? Or do you prefer cats? Or like me, would you rather just take your kids to the zoo than actually own an animal in your home?
Posted by Xazmin at 2:32 PM

I soooooo understand what you mean. I love my two dogs so much, they are so sweet. They are also not allowed on the furniture or into any of the bedrooms. I would never get rid of them or anything, but I could do without them. That sounds mean and not how I intend it to sound, but two more things to take care of in addition to a guinea pig and goldfish, its too much!!!

We have 2 dogs, and we love them both. But if they get on my furniture, they're goners.
I hate dog hair. I'm pretty proud to say that even though we have 2 dogs and they're inside half the time, we don't have dog hair on everything. The floor sometimes, but I clean that up QUICK. Cause, ew.
Your dog is cute. I can't believe you told him no and he brought her home anyway. Well, yes I can. I did that once.
We had an awesome dog when I was a kid, named Brandy and she cowered when you tried to pet her head. I think she was abused at her former home. : (
Macey

Those were some sweet picture! She is a doll! I am a dog person -- we have a 4lb yorkie. Hope you win!

I love cats, but I am a dog person. We just have a little Pom right now, but I'd love to get a Golden Retriever. I've always always had a dog ever since I was a baby. We can't have cats b/c T is very allergic. :( I am with you though on the dog/couch thing. T's aunt and uncle have several dogs and their (huge) house just feels "doggy" everywhere. I do not like visiting at Thanksgiving b/c there is dog hair everywhere!!!

I am a total dog lover for sure...

She has my vote. What a sweetie she looks like. My niece has a dog...she found by the road...sweetest dog on the face of the earth...mutt for sure...when Ramona found her...she was great with pups...and did not die...would drag bedspreads off the bed to lay on while Ramona was at work...Ramona would say...I am going to kill her....and her name became...Killer. Talk about a weird name for one of the mildest mannered dogs ever. Killer is 7 today! BTW...love the fourth of july pics on the top of your blog. I am a sucker for kids with faces painted.

Okay - i'm HORRIBLY behind!! I'm sad you're not getting to go to the concert, but SO glad you're feeling good about it!!! Also I REALLY hope you win!! You just deserve it!! okay - love your face!! Have fun at Girl's camp!!! I'm super jealous!! I love girl's camp!!

I am a kittie kat person. But I do love those dogs too.

My sweet doggie, Chief, has melted my heart towards doggies......

I hope you win the dog bed too...Ty deserves it!!

Since you're missing your concert, we should just have a sing-at-the-top-of-your-lungs party. We used to do that in college and it was a blast. Until one night we forgot to close the blinds and soon realized there were a few people watching us jump around on our furniture singing very loudly into wooden spoons to Disney songs. Ah, memories.

I have to add, that I've been to your house several times and I've never felt that it was "doggy", so congrats!

Ty looks ALOT like our dog Twix. We have 2 dogs and 2 cats. I would take the dogs over the cats ANY day. Cats have such a demanding personality, dogs are so much more laid back.

I love TY, I agree with the lame name but I love her. I would so let her lick my face. I am a hard core dog lover!


Congratulations you are the winner of the much needed dog bed!

Send me your full name, address and email address so I can send it all to bedroomfurniure.com!

You and Ty should be enjoying the new bed by the end of next week!