And the Better Boy Band is...

New Kids On The Block!

We had 93 votes. 53 for New Kids, and 40 for Backstreet Boys. Now to be fair, I really like BSBs, they have great songs. But seriously, can any boy band ever compare to the originals? That's right ladies, I'm talkin' about those 5 boys from Boston. 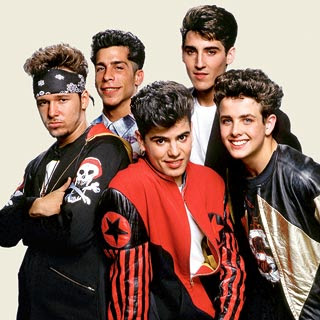 I was a HUGE fan back in the day - like posters plastered all over my room - fan. But, I'll admit it, when their star started to fall (they split up in 94), I hadn't been listening to them for awhile, or really anything for that matter. I graduated high school in '94, and met Hubby and got married in '95 - no time for keepin' up with the music! I think that was kind of the case for a lot of the fans, and their popularity dwindled, and they split.
Oh, I thought about them every now and then with the rise of BSB and *NSYNC, and remembered fondly the days of my youth - but that was about it.
THEN, I heard a rumor. The New Kids are getting back together. What? Is this serious, is this a joke? I heard more here and there - then suddenly they were performing on The Today Show, and I thought - well, good for them - that's cool. They announced their reunion tour - and it made me smile and reminisce.
When one day my brother mentioned they were coming here - before I knew it I had gone online and purchased 2 tickets! New Kids was my very first concert - got tickets for my 13th b-day - so I thought, "I should totally go to their reunion concert". Once the tickets came in the mail - it's like I became someone else! I couldn't beleive how excited I got! I got my old tapes out, but decided I just needed to download all the music from Itunes. Then their new album came out - I promptly downloaded it as well - and it was Blockhead-mania all over again! Seriously - these boys have DEFINITELY just gotten better with age! They definitely are not a bunch of old fogies gettin' back together for old times sake - they are HOT! 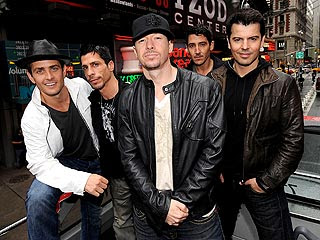 And their album debuted at #1 in the UK, and #2 in the US. Not your average comeback! Esp. after almost 20 years since their last number 1!

And their new sound is HOT! They have collaborated with some of today's hottest artists (I know hotness is a common theme in this post, and it will probably just get worse!), like NeYo, Lady GaGa, The Pussycat Dolls (don't really like any of the above, but just demonstrating that they're not has-beens trying to be relevant again). My current playlist has a sampling of some of my favorites of their new songs, from their album The Block (except of course "Right Stuff" - it's old school!) Now if you have your computer on mute - unmute it right now and listen to how great they sound! Seriously, take some time to browse through the songs and take it all in!
Now push "pause" on my playlist, because here's a video for your viewing pleasure, it's a sound-check of "Click, Click, Click" the song that brought them back together to record again. I highly recommend maximizing it to full screen. It's totally worth it.

And their concert was HOT! Seriously the best concert I've ever seen. They performed for full- on 2 1/2 hours! I was 13 again! My friend Tanielle and I went, and you have never seen so many 30 something women in one place at the same time! Not to mention all the 40 somethings, and even teenagers and 20 somethings - a whole new generation of Blockheads! So many ladies came dressed up totally 80's. It was a riot!!
For those of you who were fans back in the day - go to mtv.com and watch some of their new videos - you'll totally be a fan again! And if you weren't a fan back in the day - you might just surprise yourself. Of course, if you weren't a fan back in the day, you probably stopped reading this post a while back! But I hope you're still here!
So, I was a Joey girl back then, and though I think they ALL look FAB today, I guess I'm still a Joey girl. So who's your New Kid?
Posted by Xazmin at 10:29 PM

Email ThisBlogThis!Share to TwitterShare to FacebookShare to Pinterest
Labels: just for fun

Love NKOTB they were my very first boy band crush and first tape I ever got :)

YAY!!! I can finally express my love for MY boyfriend, Donnie!!!! I sleep with him every night! That's right ladies...Xazmin gave me a pillow with my sweet Donnie's face on it. 3 beautiful pictures infact!!! Best Christmas present ever! That concert was AMAZING!!!! Thanks X, love our boys, now I am going to go watch my man on the video again!!!

I have to say this post made me crack up! Mostly because I pictured myself dancing around my room, singing at the top of my lungs to their music. I too was a Block head. Oh man too funny. I am normally a rock girl but appreciate lots of music, and have to admit that their new stuff sounds pretty darn good!

We must be close in age cause I went to see them when I turned 15. On my birthday!

It was the best birthday gift a 15 yr old could have gotten - Donnie up close and personal. ~sigh~

You are totally right - they DID get better with age!

But I have to snag my headphones before I play the video because...I just don't know how I'd explain that one, heehee!

Sounds like a really fun concert! I can't decide which one is my favorite - they are all cute!

They are STILL HOT!

I loved Joey. Was so psyched when he was on Dancing with the Stars a few years ago. :)

Whenever I see Donnie Wahlberg, I just can't help thinking about his brother. I LOVE Marky Mark!

Under you at SITS roll call, stopping by to say hi!

I gave you an award on my blog!

I was a Joey fan all of the way. I still have a VHS of them. I still think they are great.

You all are funny. I am too old for boy bands, but I'm sure they would have been right up there with Donny Osmond, Leif Garrett and Shaun Cassidy. Yes... a product of the 70's and 80's.

They were my first concert too!!

I have a friend who still has her NKOTB jacket with almost 200 pins on it!!! It's AWESOME!!!

You're right...they're still hot! Although I had a huge crush on Donnie way back in the day and now looking at him, I can't see why I thought he was so hot. Now his brother Mark Wahlberg....serve him up with a side of fries and I'm happy! Remember Marky Mark and the Funky Bunch??? I still have some of those songs on my iPod to listen to when I work out!

Glad you had fun at the concert! Sounds like it was a blast!

They look and sound great still! :)

I won't say I was a big fan back then, but they sure do look nice now! Wow. Much better with age, for sure.

I totally had one of those 6 inch buttons with their pictures on it! and a t-shirt! they were the greatest thing ever weren't they?! tickets to their concert?, how fun!!!

OK, I was totally a fan on NKOTB. When I heard they were returning I was a bit skeptical. Until today! I am going to buy the CD RIGHT NOW via itunes. Donnie is so sexy as they sound AMAZING!!!

I was Sooooo going to marry Joey back in the day of slouch socks, hyper color shirts & jean jackets!!!!! Oh yeah!

I was so in love with Joey it wasn't even funny. Like...he gave an interview to some teenie magazine, and he said that his favorite movie was Who Framed Rodger Rabbit....and I went off to find anything I could get my hands on with Rodger Rabbit.

OMGawd...hottie mchotties. Click Click Click was the song I heard little bits of when the reunion rumor was going around...LOVE IT. If they would just come HERE I would be happy for life!!!!!!!!!!!!!! Damn them! Geez, they are hot. OK, I'm done.

I've seen NKOTB in concert three times now. Once in 1991, and then twice since they've gotten back together. And let me tell you...they've still got the right stuff. I've got tons of pics of their concert from 3/17 if you search NKOTB on my blog.

Oh girl! This is exactly how I was. Seriously. I went from just thinking about them every once in a while, to being a total groupie all over again! I wish I could hit every concert. I did the exact same thing...heard them on TV, downloaded their new tunes, fell in love all over again, bought tickets, went to the concert...no turning back! LOL :) That video is fantastic! Wasn't their concert the best?! It was awesome from start to finish and I left wanting more. My cousin and I were so sad when it ended. We felt 13 again too. I'm a Joey girl. Always have been, always will, but I must admit that they all look HOTT! They have only gotten better with age and their new music is smokin'! They are by far the best boy band!

Did you read my post w/ NKOTB pics and video? It's down toward the bottom of this post: