I was so prepared this morning! I hauled my lazy butt outta bed super early so I could make sure the morning of the first day of school went off without a hitch! Got up, fixed the kids one of their favorite breakfasts, toasted english muffins with peanut butter, honey and cinnamon. They like bananas on them too, but we were out! Anyway... had it all laid out for them, little glasses of milk, and went to wake my sleepy-head darlings. Amazingly, there was no complaining or whining of "I'm tired", "Why does school have to start so early?", and other such nonsense.

I started packing lunches for the kids, and realized I could not find a sandwich baggie anywhere! Last they had been seen was when we were packing for the reunion. Eeek. Called hubby who had a 5 a.m. job, but was planning on making it back to take the kids to school with me. He said, no prloblem, he'd pick up some baggies. Finished the sandwiches, left them on a plate, and went to work combing hair. Everyone was ready, except me (Pixie's first day of "all day school", so she wanted me to take her to her class.) and I said, "Hurry kids, lets go out and take a picture on the porch while we wait for daddy." 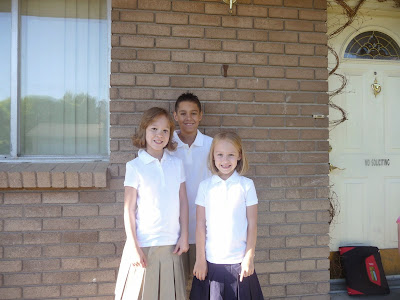 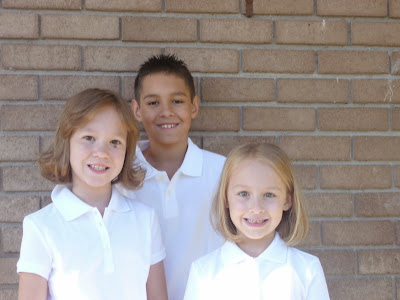 Snapped a couple of pictures, and thought I'd better hurry to get ready ...grabbed the doorknob, and - nothin'. Yes my friends, I locked us out of the house!

We hunkered down on the porch waiting for Daddy. We waved at all the neighborhood kids walking by to the neighborhood school, the 3 oldest in their uniforms, I in my slobby housework clothes, and Monkey in her t-shirt and panties (she refuses to put her pants back on after using the potty). Yeah, it was great.

Daddy pulled up, we rushed in, a crammed all the sandwiches in baggies, tried to make myself halfway presentable and piled into the car.

School starts at 8:30, we pulled into the school at 8:32, and I still made my kids pause for another picture outside the school. 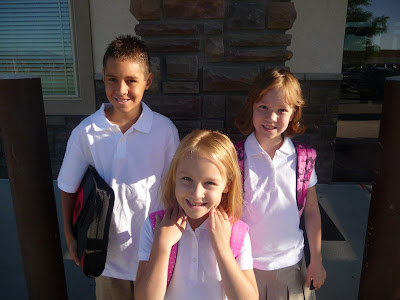 And THAT is how we were late for the first day of school. Me, a founding member, a Board Trustee, one of the whiny parents who has complained at meeting after meeting about the lack of respect many parents seem to have for school policy and rules - I set a shining example this morning...the first day of the new school year. Yay me.

Oh, p.s. - to anyone out there still reading my posts...I promise I haven't forgotten you! I broke my computer, and am awaiting the technician's report on what can be done. I snuck out to my mom's today to make this post, and I have to go get the kids from school now...but I promise I will be by as soon as I get my computer back!
Posted by Xazmin at 1:40 PM

At least Friday is only two days away. ;) ;) I hope your computer is well soon so you can come back to blog world. ;) The kids look adorable (and such good sports with the photos!)

Cute pictures! It seems like we are late for everything, no matter how prepared I try to be.

Hope they had a great first day back!

Oh no, so sorry! Of all the mornings for that to happen. Hey, at least it didn't seem to bother your kids too much they were all still smiling :)

What a rough start to your day! Hope it went better afterwards!

I hate when days start out sucky like that!
Hope it goes better the rest of the day and I can't wait until you get your computer fixed or back or whatever it needs! :)

Cute pictures! Sorry you had such a rough start! I made Cameron tardy 3 times last year. I said no more this year!! We will see!

What a day! Great pictures!

Too funny!! Sorry about getting locked out of your house. I can relate to that all too well. Cute pictures though and how great your husband was able to come to your rescue!!

Hey, this sounds like something that would happen to me. Doesn't matter what time I get up and how "together" I feel I have everything...I'm always late! But after a few test runs we usually can get a routine down. You have plenty more mornings to do over!

That's way better timing than us on a good day :)

They look so cute in their school clothes!! And look, smiles on their faces! Nothing like the first day back!

this ia so funny i can not remember when i laughed so hard!! !

FUNNY! We're all late once in awhile. Your kids looked adorable, and so I think that's all anyone will remember.

Good luck with your computer.
Have a good day.
Sandra

Oh well- it happens to all of us. I broke my digital camera the NIGHT BEFORE my oldest's first day of kinder. We rushed to Circuit City to buy a new one 10 mins before they closed!

But we all made it safe and sound- just like your sweet kiddos!!

Oops. What a funny story. I love the picture and the children look wonderful...

What a way to start the day. Sounds like something I would do. The pictures turned out really well though! Tomorrow will be better.

That sounds a lot like something that would have happened to me... way to set the shining example... :) hehe

What a day! That one goes down in the record book, huh?! :) Hope your week has gotten better and hope your computer is fixed SOON! I was going to e-mail you this morning and then thought to myself "she CAN'T read it!" The kiddos looked ADORABLE for their first day! Hope it went well, despite being late. :)

Oh, and locking your keys in the house...that's something I would do and have done. So, don't feel bad.

They looked so cute. I love the first day of school...they are so excited....and fresh....I am glad they made it to school near time. I hope your school is like ours...we don't count tardies the first few days!

That was hilarious! and the pics are so adorable! First day tardies don't count!

just wanted you to know I was thinking about you and I love you!! You're a bright spot in my little life. Thanks for all you do.

There's an award for you from little 'ole me on my blog today! :)

Well now it is the weekend and I hope it goes much better than this day :o)

What a morning! The kids look CUTE! So that is all that matters...Right??! ;)

Totally something that would happen to me!

Things happen. At least you have a valid reason... (A hidden spare key is helpful - FYI)
:)