What (who) is your obsession?

1: a persistent disturbing preoccupation with an often unreasonable idea or feeling.

Well, I must say I don't find this definition of obsession very flattering at all! In fact I'm quite offended! Do you guys think obsession is disturbing or unreasonable? Yeah...me neither.

I don't find my adorable friend JennyKate's obsession with Edward at all disturbing, or unreasonable. Okay, she did get a Twilight tattoo...hmmm.

And what about my dear friend Tanielle? Just because she vacuums a minimum of once a day, often twice, does that make her disturbing or unreasonable? Of course she has gone through 6 vacuums in her 6 1/2 years of marriage....hmmm.

And my obsession with NKOTB is in no way disturbing or unreasonable, right? I mean just because I did a weekly video countdown to their Vegas show (which I had to miss in the end!), c'mon...I was just copying my fab friend Amanda's video countdown to So You Think You Can Dance (SYTYCD)!

That brings me to my current obsession. I kind of have obsession ADD....I have multiple obsessions, none of them ever leave, but I kind of rotate through them depending on what's goin' on in my life! With the new amazing season of SYTYCD, my obsession with this guy has been rekindled: 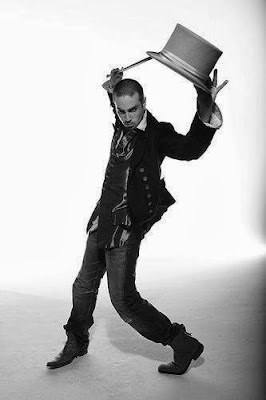 If you don't know who Wade Robson is, you are seriously missing out. This guy is a freakin' genius! I mean for real.

Aside from the late Michael Jackson, I don't know that there ever has been, or ever will be, a man as brilliant on the dance floor as Wade Robson.

By the age of 5, he was performing professionally. By age 12 he was teaching dance classes in Hollywood. He received his first professional chorography job at 14. By the age of 16 he was choreographing music videos and commercials for the likes of Britney Spears, and *N Sync. He also became the director of both Britney, and *N Sync's world tours at 16.

He has been a judge and choreographer on SYTYCD, and has won multiple Emmies for his work. I have barely scratched the surface here with this post, you can look him up to see the looooong list of his amazing accomplishments. All this and the guy is only 27 years old!

I'm hookin' you up with some of my favorite Wade youtube videos. there are lots of great dancers, and some talented choreographers out there...but the way Wade moves his body is magical, almost supernatural! Even when compared to the other dancers he's performing with. Have I said brilliant, or genius yet?

Since some of them are super short, and I can't decide which I love best, there's gonna be a bunch...just watch whatever you want from the selection! I highly recommend maximizing the video and watching it full screen!

Here's Wade in the studio... the other dancers pale incomparison.

One of Wade's award winning numbers, he choreographed this piece for Season 2 of SYTYD, and did a surprise guest perfomance in this encore edition. He's the one at the head of the stairs, with the long white sleeves, and buttoned up brown vest.


The Hummingbird and The Fl0wer. This choreography also won an Emmy.
This is just a fun compliation of some of Wade's fabulous work, choreography, performances and show's he's directed.

Email ThisBlogThis!Share to TwitterShare to FacebookShare to Pinterest
Labels: just for fun, SYTYCD

Bet you didn't know that I taught him everything he knows huh?? Yeah, right!
:)

Hi IS amazing. I don't think your obsession is unhealthy. I didn't that Tanielle loves to vacuum that much - me too! So funny!

Oh to have even a sliver of his talent!

I don't blame you for being obsessed.

Thanks for the shout-out...I don't think we are weird at all. Now, it would be weird if we were planning on rushing the stage and marking "Bleeding Love" or something during the tour. Not that I'm planning on doing that or anything. L won't let me.

WOW!!
I watched every one of the you tube vids!
I also watch SYTYCD
Thanks for gathering them up for us!!
Love dancing!
My email is "tapdancer"

Wow amazing talent! If I could move my body with rhythym like that....well lets just say Levi would be a happy man!

I LOVE this obsession! He is PHENOMENAL! Seriously an artistic genius! I'm glad you don't think my obsession with Edward is bad...even though I do have a Twilight tattoo. :) You still love me, right?! I share your NKOTB obsession, so I know you don't think I'm weird for that one. I am glad I am only fascinated with shiney vampires and boy bands. Apparently, I have an addictive personality...that's my psych friend's explanation for all of my...achem..."obsessions". Good thing I'm not amused by crack or something like that. All my "addictions" are legal. :)

I'm loving me some Wade! Thanks for the smokin' videos! It makes me want to run right home and watch my DVR'd episodes of SYTYCD! I've gotta get caught up!

Hope you're having a great day!

Wow that is amazing. I have been out of town and will hope to join in next month for your Mod Podge .

After seeing all those fabulous vids, I may be having to start watching SYTYCD. Thanks for sharing!!

That Wade is some kinda talented. Ya know, like me :)

Some people say obsession like its a bad thing, whatever!

Love me some Wade!!! Thanks for introducing him to me a year ago. He is amazing!!!

I have ALWAYS loved Wade!! He is AMAZING! I am floored at some of the stuff he comes up with!!

I loved that last video- thanks for finding it!

Are you going to the tour?? All the good seats are sold out here and I just don't know if I want to see them as small as ants dancing around!!

I have always loved SYTYCD, but it was that freaky vampire-ish routine in season 2 that got my husband hooked!

(So what's wrong with a little obsession now and then?! I say go right ahead!)

I do LOVE Wade! Didn't you love the Crash Test Dummies dance this year!?! Good obsession!