Today I'm linking up with my girls Shawn and IA, which I haven't done in forever!  If you want to read part 1, go here.

The kids were so excited about the fact that we were adding another member to our family!

When it finally got to the week of my ultrasound, I called the hospital to set up my appointment.  They went over all the rules with me.  One of them was "only 1 other adult and no children."  WHAT???  I have never been prevented from bringing children to the ultrasound before and I was super bummed.  But not nearly as much as the kids were.

They kept asking us if we would call the school and tell them if they were having a baby brother or sister once we found out.  We tried to explain that we couldn't just call the school and have them called out of class, disrupting everyone, just so we could tell them.  They didn't understand why not.  They think because I'm on the board I can just do whatever I feel like, without regard to protocol.  I probably could without having anyone say anything to me, but it doesn't mean it wouldn't bother people, or that I should.  I try not to overstep my bounds.  Too much. ;)   They were super bugged at the thought that we would find out in the morning, and they had to wait clear until after school to find out.

Here's what I did do.    I had seen this cute little idea on Pinterest about using a paint strip and sharpie to announce baby's gender.  So I grabbed some paint strips at Walmart on the way home from the ultrasound.  I went into the office at school and made a photocopy of the best ultrasound picture for each of my kids.  I wrote on the paint strip and stuck the strip and the picture in an envelope, then wrote the name of one of my children (not in my normal handwriting) on each envelope.  Then I asked one of the awesome ladies who works at the front desk to deliver them to my kids in class.  She of course stuck around to spy on their reactions.  They all started out looking confused and then when they opened their envelope, without exception got huge grins as they realized what it meant.  She was expecting Bookworm to be disappointed, but she loved that he just got a big smile and leaned over to show his friends.


This is the picture I used to announce on Facebook.  I wrote the words a little differently on the strips I gave to my kids, but this will give you the main idea. 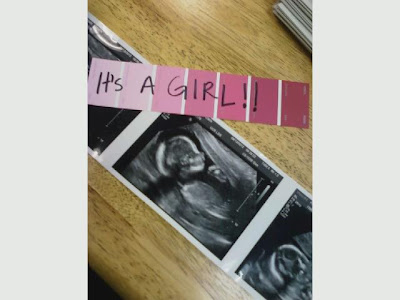 After school the kids were once again full of excitement and questions.  The girls gave me their envelopes to put in my purse so they wouldn't get lost or ruined.  I asked Bookworm what he did with his picture.  His reply?  "I hung it up in my locker."

That is a cool way to share the gender!

So cute and congratulations on the new addition. Such precious moments with your kids.

Aw congrats! That's such a clever way of revealing the gender, and I love how you included the kids!

Awe love that he hung it in his locker!! What a sweet big brother. Fun way to tell them

You really know how to build anticipation! What a fun way to let your kids know. I love Big Brother's reaction and how tender it is that he hung it in his locker.

This is so cute, the way that you revealed it is innovative and absolute genius, congratulations to you guys on the upcoming little girl.

I'm just so excited for you guys! My girls would LOVE for us to add another one too. But Jeremy says, "ENOUGH!" ;)

So cute! Some of the things I see on Pinterest almost makes me want another one....almost!

Love it. Some friends of ours did it with a cake. They did not want to know until everyone else did...so they had the radiologist put the ultrasound results in an envelope...they took it to walmart...and walmart made the cake with the layers done in the correct color...what a surprise when they cut their cake and there was a blue AND pink layer.