Time to link up with PMM and talk about my kiddos.  Yeah, like I need an excuse.

First off - no Baby Girl yet.  I was really thinking yesterday that I might be headed to the hospital by the end of the night.  But then - nothin'.  Which is totally okay, because guess what I haven't done?  I haven't made this baby girl a single hairbow!  That's what I'll be doing today.

But today I'm telling you about my OTHER baby girl.  My Monkey.  Seriously, this girl cracks me up.  The stuff she comes up with is just too much sometimes.

A few weeks back she climbed into the car after school and was just beside herself.  "I lost my tooth today," she said.  And then bursting into tears she added, "and then I REALLY lost it!".  When I asked her what she meant she told me that she had taken it out to recess to show her friends, and she lost it.

Later that night, Hubby came in to show me what he had found in place of her tooth: 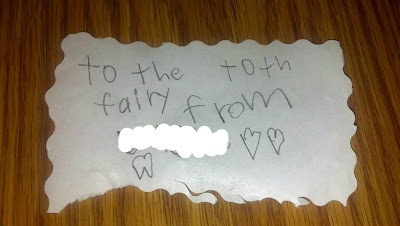 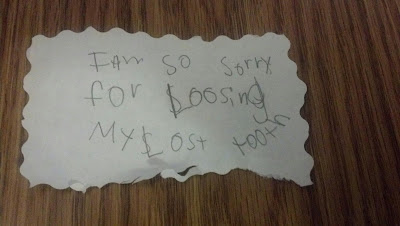 We were dying.  And how could the tooth fairy deny that?  So she was still compensated, even though she lost her lost tooth!

A couple of Sundays ago the girls brought home a spotlight paper to fill out from Primary.  Monkey took it upon herself to fill hers out on her own, without waiting for us to help her: 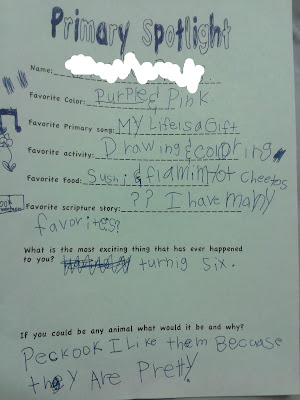 Seriously?  The girl has never had Sushi.  And I guess it is a sad reflection on Hubby's and my parenting that the most exciting thing that has ever happened to her is turning six.  I guess we'll have to work on that.

She never ceases to make us laugh.  And that is such a good thing because on those days when you just want to cry - a funny six year old girl can turn it all around.  We are so blessed to have her as part of our family.

Kids are so much fun at six. She seems adorable.

This is so adorable haha, writing a little note for the tooth fairy and everything, so cute! Great post Xazmin, hopefully baby girl comes soon!

Lol! I was about to say, wow I am impressed she likes sushi- hehe too funny. I think my guess for the baby was the 1st, so you can go tomorrow ;)

Thanks so much for linking up

One of these days I am going to get it together & link up to this.