Yesterday I read this article on our local news website.  If you don't want to go to the link, here's a quick summary:

An 11 year old girl who has been playing in a community youth football league for 2 seasons has been told that she won't be able to come back next season and play with the league, which is supposed to be an all-boys league. 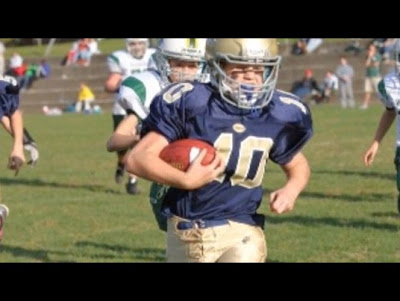 People are up in arms!  And the family has started an online petition calling for the Catholic Youth Organization to allow girls to play in the league.

I guess I'm missing something.  I don't see this policy as discriminatory, or old fashioned.  I see it as common sense in protecting participants, as well as the league's own liability.

Cowgirl (age 12) is an excellent soccer player.  She loves it.  A couple of seasons ago, she was invited by her then coach to join a competitive (all-girls) soccer league that he was moving his daughter to, out of our local recreational league.  She went and practiced with the team and loved it.  But the more she thought about it, the more she felt like she would like to work on her skills a little bit more in our rec league before doing competition soccer.  She signed up for another season of rec league (which is a co-ed league).

She still loves it.  She is still one of the best players on her team.  She's better than the majority of the boys she has played against, and most of the boys on her team.  But she has relinquished her (well-loved) position of playing goalie.  After the first couple of games I asked her why the coach wasn't letting her play goalie.  She told me that she had been offered goalie but had told her coach she preferred not to play that position.  I was shocked - in previous years she had always had to sort of fight to get the chance to play goalie, due to several boys also wanting that position.  I asked her "why?"

"Mom," she said, "The boys my age have gotten so BIG - and they kick HARD!!  When I block or catch the ball it hurts!"

She still has the skills to hold her own with the boys.  But it is reaching the point that the physical differences in the way the female and male bodies are built is starting to make a difference, despite her talent.  It will soon be time to move onto an all-girls league.

And that's in soccer.  I can't imagine having her play a full-contact, tackle sport with some of the boys that I see her playing soccer with.

So am I crazy to think this decision by the youth organization is a little more based on common sense than on discrimination?  I just think the people all fired up about this are trying to create controversy where there doesn't really need to be any.
Posted by Xazmin at 12:00 AM

Common sense doesn't enter the discussion all that often any more. And no one wants to admit that there really are differences between girls and boys.
The mantra has been girls can do anything boys can and it gets taken too far all too often. Just because they can doesn't mean they should.

I agree with this so much in all honesty. It's a damn shame if this girl is good at football and unable to make it with the boys but there's divisions in sport for a reason and in all honesty that shouldn't change. Sorry to hear about your daughter as well but she's right to eventually join an all girl's league and you're right in the points that you've made.

Safety should be #1 first for sure! It's such a tough line, I wish there wasn't so emphasis on boys vs girls. Not sure why girls would want to be on a complete male team anyways, i mean do they feel like they have something to prove. Man, I am all over the place on this issue. LOL

I COMPLETELY agree with you. Unfortunately, it means that girls just don't get to play football. Which is sad. Maybe what the petition SHOULD be is a sign-up, to make a girl's team!

Well said my friend. Some people have the ability to make the most beautiful rose stink.

I have an athlete for a child. She is fast, strong, passionate, driven, completive and a GIRL. Could she play baseball? Probably. Do we want her to? No, for all of the obvious, common sense filled reasons you have already listed.

Love how VandyJ said it- people really do like to make a big deal out of things they shouldn't. And boys and girls truly are different and that is a good thing and we have got to stop fighting it so much!!