Proud Mama of kiddos doing their part in the fight against Cancer.

For anybody who has been around my blog for the long term, you know that each year our school does a big fundraising, multi-activity event called Pedals for Hope, to raise money for cancer research.  It kicks off with an assembly where they start their penny wars - a fun competition where each grade tries to raise the most money in pennies.  Grades can sabotage other grades by putting monies of larger denomination in each other's collection jars.  So however many pennies they collect count FOR their total, but then whatever they have had put in their jar that is larger (quarters, dollar bills, 20's) counts AGAINST their total.  Between the students collecting pennies, and then adding larger amounts to each others collections - we always have quite a fun and successful "war".  Pixie's grade has won every year. She loves to remind her brother and sister of that fact.

The next thing is the Locks of Love assembly.  Anyone who has a minimum of 10 inches of hair to spare, can chop it off and donate it.  It's a big to-do, with all the hair donors sitting in chairs lined up on the stage, hair stylists lined up behind them with scissors, and then chop, chop, chop to the applause of the rest of the student body!

The culminating event is the Pedals for Hope bike ride, where the 8th grade students, who have been collecting sponsorships and other donations ride their bikes along a riverside trail for way more miles than I could even think of riding!  In the past it has ranged from 40 to 100 miles.  This year there is a number of hours allotted, and mile markers along the trail, and students ride as many miles as they desire, and are able, during the allotted amount of time.

How does this make me proud as a mom?  First, I have Cowgirl, who has hair that reaches more than halfway down her back.  These were taken before school this morning. 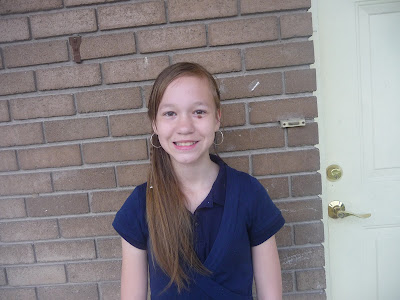 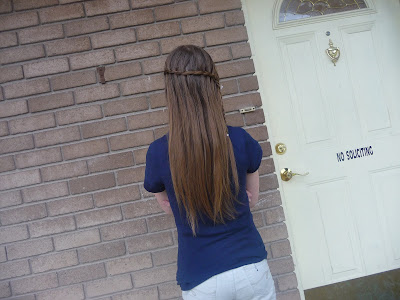 Tomorrow she will be donating 12 inches in the Locks of Love assembly.  Pixie did it last year, and they both did it together 2 years before that (it takes them a minimum of 2 years to grow it back long enough to donate again).  You can see the before and after pictures here and here.

Then there is Bookworm.  Not only is he riding next Friday, but out of designs submitted by the entire 8th grade, his was the one picked to be the T-shirt design for the 2012 Pedals for Hope t-shirts that all the riders will be wearing.  I know he is really proud of it, and I am proud of him! 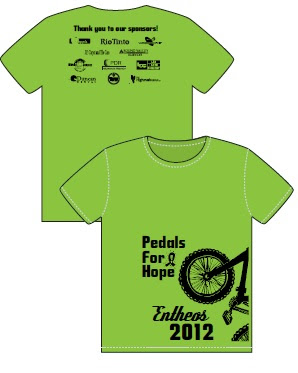 All money raised goes to the Huntsman Cancer Institute, the only National Cancer Institute - designated Cancer Center in the Intermountain West.  HCI is considered a world leader in cancer genetics.  It's scientists have helped identify gene mutations responsible for colon cancer, melanoma, neurofibromatosis, and most recently, hereditary paraganglioma (a rare cancer afflicting the interface between the endocrine and nervous systems.)

We all know someone who has been affected by this terrible disease.  I'm proud of children who are doing their part to help win the battle.  If you'd like to donate you can click here.  All donations go directly to the Huntsman Cancer Institute on behalf of our school.  You have until next Friday (April 20th).  I would love if you felt you had any amount that you could donate.  Cancer needs to be stopped.

I'll be updating you next week with the final total and pictures of Cowgirl with her new, short 'do!

I had really long hair in grade school but I think I would have been way to chicken to cut it off then.

Thanks so much for linking up!

I remember your girls cutting their hair before for this...so cool, I can't wait to see the after pics!!
And Bookworm SHOULD be proud of that shirt...it's very cool!

Cute shirt! Way to go Bookworm! I know you are a proud mama! You have obviously raisd some very giving children. Can't wait to see the new haircut.

Go Pixie. I love a good friendly competition (I love winning the most though)

AWESOME about the Locks of Love, I totally wish I had known about then the very first time I chopped Amira's hair.

What a very mature thing for Pixie to do! I love that she's cutting her hair for such an amazing cause!

I donate to American Cancer Society on a regular basis since my best friends 9 month old was diagnosed with eye cancer. She's now almost 3 and cancer free!

Wow. What great things to be proud of. It sounds like you have some amazing kids.

Thanks for linking up!!