I'm not usually one to do multiple blog posts in one day.  But I couldn't pass up this week's edition of WWTK - so even thought I posted already - I'm doing it again!

This week's questions come from Mamarazzi - here we go!

1 - If you had to be trapped in a TV show for a month, which show would you choose?

I'm going to have to go with Hawaii Five-O.  I mean, not only is it in gorgeous Hawaii (where I've never been, and may never go), but then you've got these guys to look at when you're done appreciating the island scenery: 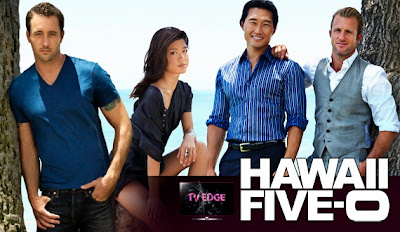 Plus I want to be a tough chick who carries a gun and can beat the crap out of bad guys.

2 - If you could be guaranteed one thing in life, besides money, what would you ask for?

That is a tough one, but I think I would choose wisdom in raising my children.  Seriously people - I don't know what the crap I'm doing.

3 - If you had to name the most terrifying event in your life thus far, what would it be?

It was terrifying at the time, but ended up being no big deal.  But basically when my son was born, he was a really fast breather (all of my kids have been as newborns).  The staff got all worried and ordered a spinal tap to check for infection, which was terrifying in and of itself.  But then when the doctor came to talk to me and I asked him (as a first time mother mind you), "What does it mean if there is an infection?"  He bluntly answered, "Well he could die." in a tone that was like "duh!"  He had a lovely bedside manner.  I was pretty terrified although it ended up being much ado about nothing.  There is a lot more to the story, but it still pisses me off every time I think about it, so I'll save that for another day.

4 - If you could possess one supernatural ability, what would it be?

So I've said this before, and I don't know if this is the kind of supernatural ability  Mama had in mind when she asked the question, but I have always wished I could be like Jeannie and "blink" things to happen.  Like blink my house clean, blink myself from one place to another, blink a red light green, you know - stuff like that.  That would freaking rule.

5 - If you could "uninvent" one thing in the world, so that it would no longer exist, what would you choose?

I'm going to go with cigarettes.  No offense to anyone who smokes, but I get sick to my stomach when I get even the slightest whiff of cigarette smoke, and I can smell it from a block a way - seriously.  I hate having that smell sneak into my outdoor fun and make me gag.  Plus, people who smoke around their kids make me really mad.  Really mad.

And there you go!  That was fun - you should totally do it.  Click the button and link up here:

The guy on the left!! Smokin!
And not cigarette type of smokin.
Smoking infringes on my right to breathe clean air. I hate when I'm behind one in my car...windows up and I can smell it. Comes through the vents!
Oh wait. I mean...I can't smoke there? Poop.
You're doing a great job with your kiddos. Come teach some of the parents of kids that go to school with my boys how to be parents. You could use a baseball bat!

Ohhhh hot DaaaaMN! McGarrett is freaking gorgeous! I heart him!!

I don't think any of us know what the crap we are doing. I know I make it up as I go. I heavily rely on the "It takes a village" thing. LOL

Doctors forget that they aren't talking to other doctors sometimes I think. I think they all need sensitivity training on a regular basis.

I forgot to tell you, I smoke 2 packs a day. Don't worry I will smoke outside when I am visiting. hee-hee I kid, I kid. I'm with you on the cigarette thing too. They are Grooooss!! It is so yucky driving, driving with my windows up & being able to smell someone smoking. How can they stand to be in that stinch? YUCK!!!

I also picked Hawaii! Love them all but I have a special soft spot for Scott Caan :)

Great un-invention. I have too many friends who smoke who wish they never started.

Yes!!!! Cigarettes for sure! Good one. I don't think any of us really know what we're doing as parents and if anyone thinks they are an expert, it is pretty much guaranteed that they are crazy. Your doctor was something else, huh? Nice bedside manner. Not! Wow. I just really dated myself with the "not" but I guess that is better than "psych!". I am such a dork.

Oh I like your uninvent- very good one! And what was with that Dr! That is awful and some people really should not be dr's

I hate cigarettes too. Good pick!

Love your super power. It's all encompassing.

Hawaii 5-0 is an EXCELLENT choice!

I can't believe that story about when your son was born. How awful! Some doctors really don't think before they speak. It makes me so angry.

And I'm with you on the cigarettes. I wish they had never been invented.