The Giddiness that will NEVER End!

I may never come back down to earth again.

BECAUSE I FREAKING MET

That's right people. I met him. For real.

If you know me, you have probably heard of my love and undying devotion. To the point of wanting to choke me, because you're so sick of it. Sorry.

The team flew back from Mexico last night. They were returning from the first leg of the CONCACAF Champions League Finals. It's sort of a big deal. Like REALLY a big deal. The first team in Major League Soccer to go this far. Ever. Making a huge name for ReAL Salt Lake, as well as representing the entire League of US Soccer.

At the last minute we (and by "we" I mean "me") decided we should go over to the charter air strip and join other fans in welcoming the boys back home. Had NO idea that we would actually get to mingle with them. And take pictures, and just basically be in soccer heaven for a short time.

I would normally never, EVER post the following pictures because of my freaking fat face, and wind-blown (and not in the sexy way) hair. I am very particular about the pics I post. I know it's silly, but it's just a thing I have. But I am so excited to share my giddiness with you, that I'm just gonna pretend y'all won't notice the extra chin(s), and overall unflattering appearance of my face. And hair. And body. Just play along...kkthanks. 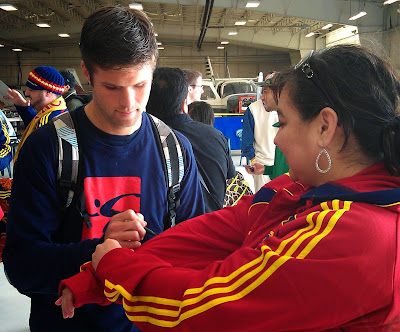 Here he is autographing me (sigh). 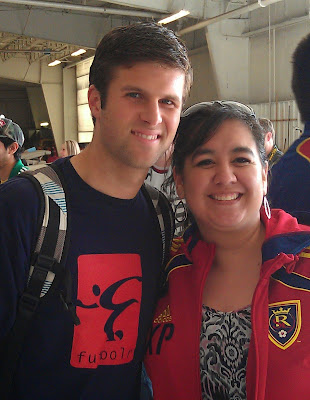 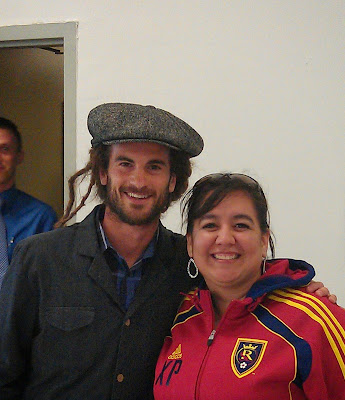 Had to get a pic with team captain Kyle Beckerman just to make Tanielle mad. Just kidding. I wanted to meet him too. And he was SO friendly. 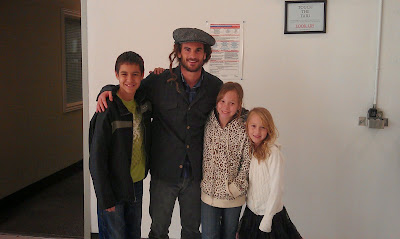 Don't worry, I made sure my kids weren't left out of the fun. 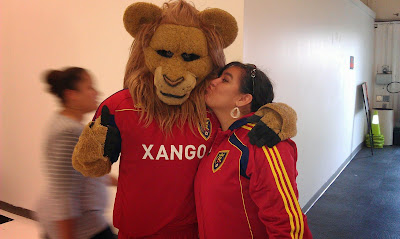 Here's me giving Leo some sugar. He is the BEST mascot. Love Leo. 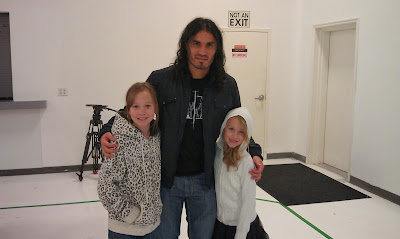 Fabian Espindola is a freaking soccer ROCKSTAR. The girls were excited to meet him. 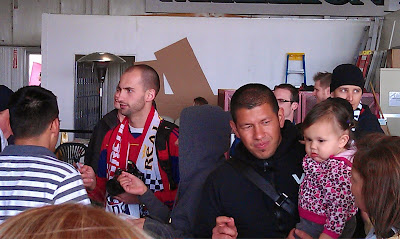 And Hubby snapped this picture of Nick Rimando and his adorable little girl. I am not exaggerating when I say Nick is THE best goal-keeper in the country. Just sayin'.
I confess that even though I'm super excited to share, in looking back at my pictures...I'm not sure I want to hit publish. But I am trying to move past my insecurities about posting photos of myself on my blog. So I'm going to do it.
Click the button for more confessions, or to link up!

That is so cool! I'm glad you got to meet some of your heroes. Those REAL guys are great. They really support the schools and the community. GO REAL!
Sandy
www.twelvemakesadozen.blogspot.com

You are so right!! Chris is HOT and we are lucky to have those guys play for HOME! What a cool team they are. What a cool fan you are! :)

You look great!! I admit I like soccer, and I also admit I have no idea who these guys are or what team they play for LOL. But I would soo be like you with football!

You look great!! I admit I like soccer, and I also admit I have no idea who these guys are or what team they play for LOL. But I would soo be like you with football!

i agree with Shawn...i wish all of my friends would stop speaking so unkindly about themselves.

this may call for some kind of "Love Yourself" intervention.

You should definitely hit Publish. :) You look great, and so excited. I'd be excited too, b/c he is Hott! ;)

I'm glad you hit publish because you're excitement just radiated from your words, thus making me smile while reading.

The team must've been so thrilled to have so many supporters waiting for them!

Loved the pictures. Thanks for sharing this wonderful moment with famous people. I am so glad you got to take advantage of this.

How could anyone look bad next to such great looking people--the hottness just rubs off.
Looks like a cool evening for everyone.

I'm am STILL just SOOO freaking excited for you!!!! I wish I was there. Did you pee a little? In your pants??

And, you look adorable so SHUT UP!

Those pictures are so cute! And you look good. REALLY, you look great!

That's awesome you got to meet some of your favs! I'd be giddy for days too!

PS Love the name of the mascot! I have a Leo at home, and he's just as LOUD as a lion. LOL!

That is SO COOL, Xazmin!!! I'm sure this is the equivelent of me meeting Rob in person...and having him sign my br...er, unde...er, Twilight shirt. achem.

He is super cute!! I'm glad you got to meet him (and the others) in person!!!

I'm not going to tell you to shut up, because I already did via text last night. I think you look adorable!
So does he.
I think you make him look good, though.
Without you there, he'd be like a 9, tops. :-)

I meant that in a good way. Like you made him glow because he was happy to meet you too...
When I reread it, it sounded like an insult.
Because I suck.
You're beautiful, woman!

First of all, you look beautiful. You need to quit talking trash about yourself. (Go visit www.operationbeautiful.com and change those thoughts.)

Second, how exciting! And yes, Chris is very cute.

Have a fabulous weekend!

How exciting to meet someone famous that you admire! I confess...that I have no idea who that is, but from the pictures I assumed he's a soccer player. Ha. What is this sports you speak of? ;-)

Ok I could care less about soccer (sorry!) BUT I am super excited for you! How awesome!!

How awesome is that! So happy you got to meet your boyfriend ;)