I'm sorry for those of you who aren't into the Olympics. I wasn't planning on doing an Olympic post today. But THEN last night happened.

Did y'all watch the Men's Free Skate last night? Did you see American, Evan Lysacek skate the program of his life...and take the gold!?! He is the first American to take the gold in Men's Figure Skating since Brian Boitano did in 1988. 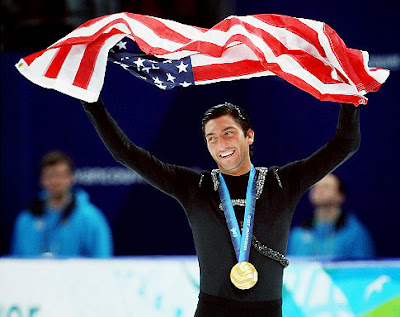 Evan's victory lap...Woot Woot!!!
And did you see this cry-baby go on and on about how he (Evgeni Plushenko) should have won the gold? 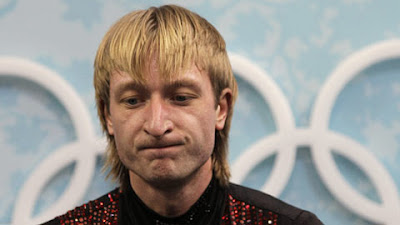 He pulled rude faces like this during the whole medal's ceremony.
He first tried to blame it on the new scoring system, which ironically was adopted to make the scoring more fair, and make it harder for judges to sway the outcome toward their own bias.

Then he had the nerve to say that basically he didn't believe Evan deserved the gold, and that he was certain that his own performance was the gold winning one.

Now, of course I'm no expert - but I have been watching figure skating pretty much my entire life. The big controversy is that Plushenko put a quad jump into his routine, and Evan didn't. Well the quad jump is worth 9.8 points, and the triple done by Evan is worth 9.5. Not a huge difference, but the judges take deductions for other things as well. Evan landed every jump, and executed all of his footwork elements flawlessly. Plushenko on the other hand was off during much of his routine. Although he landed the quad, and all his jumps...there were some wobbles. And quite frankly his footwork sequence, and other passing wasn't nearly as nice as Evan's. Just sayin'. It is my non-professional opinion that Evan skated a better program than Pleshenko, and he deserves every ounce of that gold medal hanging around his neck. Go Evan...you did America proud!!!

Plushenko's attitude during the National Anthem annoyed me, his post-interview on NBC annoyed me a little more, but when I got up this morning and read more of the comments he has been making, well I just got really ticked off. Grow up, be a man - SHUT IT, oh, and get a freakin' haircut!

Want to hear more venting? Head over to MiMi's!
Posted by Xazmin at 12:20 PM

I didn't see it, and I should laugh, but teeheeheee I love your description of the events in question!!! LOVE YOU!!!

As Olympians they are role models and I don't think being a "Poor Sport" is setting a good example.

Great post and Great job Evan..I'm so proud to be an American!

I didn't see it, but I am QUEEN of ice skating. Okay, maybe not, but I LOVE to watch it. Hello. I'm a jerk, a biased jerk at that, but America ALWAYS is better than Russia. So there. Plushenko - you look like a BIRD. Toucan Sam anyone??

LOL! I hate poor sports too! I didn't watch this part of the olympics - but I'm pretty sure I would've been just as annoyed as you!

Booooo! Sore losers are the worst.

Someone with no sportsmanship doesn't dererve to win...Yeah for America for taking the gold!!!

You sound like you are enough of an expert for me! That is lame and is just making him look pathetic, he can go cry me a river- there are plenty of people that would have loved to even perform in the Olympics let alone place so he should just count his blessings. Vent on sista!

I agree with you.

I also believe that good sportsmanship is actually more important than winning.

I watched it and I soooo AGREE with you. I saw his face at the medal ceremony...and they kept flashing between the two guys...so they knew what a poor sport he was. And yes, he needs to get a hair cut! Did you see how happy Evan was back stage...that just gave me goose bumps. Go USA!!!

I dvr'd it, but didn't set it long enough, so it cut off right as Pleshenko came out on the ice. Then I switched to live and saw the medal ceremony, so knew that Evan got gold, but I wasn't sure if P. fell or what. And I did notice his face, but just figured he was so disappointed with himself. I didn't hear any of the complaining...that's just nasty.

I'm so sad I missed it! I've always been so into the olympics, but this year for some reason it has eluded me. I did see that one French (?) woman biff it at the end of her alpine skiing though. Don't wanna sound like a jerk, but since two Americans won medals in that...hehehe! I like how MiMi compared the Russian guy to a bird! It's so true! Really, dude, come to my house, I'll give you a little trim...or a buzz cut!

Gosh, I missed that! I hate a poor sport too.

I haven't watched any of the Olympics, but that would have ticked me off too! How mean!

Honestly, I was having a HARD time staying awake so I think I slept through most of Evan's performance, but I totally agree that Mr. Russian is a total and complete poor sport. Punk. Evan deserves the gold. I saw his previous performances and he's GREAT!!!

We were watching snow boarding last night and when my husband saw Plushenko's picture, he seriously said, "turn it off! I can barely handle watching woman's figuring skating, I do not want to watch him"

Thought that might help make your day a bit :)

I didnt see it but he can just wah wah wah all the way back home!

I completely missed this but he sounds like a big old baby.

I didn't see it, but spoil sports make me roll my eyes. Sounds like a real loser....

I didn't see all the fuss, which is a good think because I detest sore losers, but I did watch the competition.

Evan Lysacek's performance was a dream. It is difficult to describe the pleasure derived from watching such a routine.

He chose both a costume and choreography that suited him perfectly. It was so impressive the lack of acrobatics were of no consequence.
In contrast it was painful to watch the other skaters, including Plushenko, wobbling all over the ice tripping over their toe-break as they tried desperately to hang on to their quad landing.
Just a look at the replays showing
Lysacek's 'effortless' triple/double/double that he landed with an elegant flourish is enough to understand why he won.