Did you miss me?

Sorry I've been MIA for a few days! Life has been a little crazy! But now you get to have a whole bunch of stuff you may or may not care about shoved at you all in one blog post!

My paternal grandmother passed away a while back. She had a good life and left behind a large family and a lot of accomplishments. All of her children of course received their inheritances and the different things that were left to them. But there was a lot of stuff left over in the house that has just been sitting.

Recently my uncle decided it was time to sell the house and the task to clean it out was under way. Basically my mom and a couple of my dad's sisters worked to go through stuff and get the place clean. Everybody was notified that if there was anything they'd like to keep, that they needed to come pick it up and the rest of the stuff would be donated.

I went over one of the days to help my mom clean, and brought home some things that I thought had great repurposing potential...I'd love your ideas on what I could do with some of this stuff! 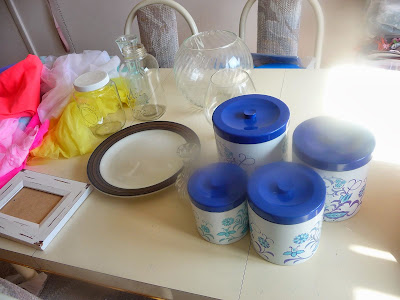 I think I have a good plan for the canisters, the plate and the frame...but I'd still love your suggestions! 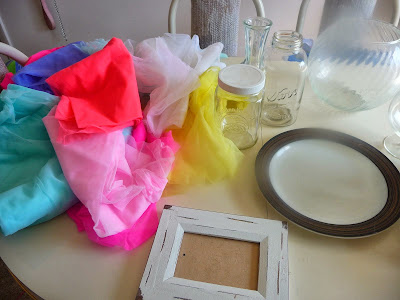 I don't have a clue what to do with all of this fun, colorful fabric, but it was too bright and happy to pass up! It's the sheer, silky feeling stuff. Any suggestions? 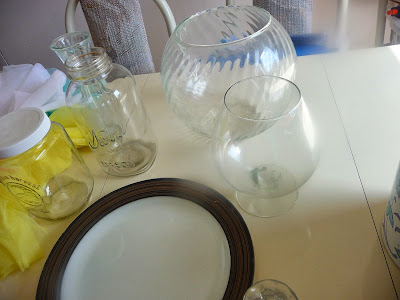 This fishbowl/vase looking thingy is seriously huge...like bigger than a basketball. Also the brandy snifter (I think that's what you would call it ...we don't drink so I'm not up on all the terminology!) Is really big. The opening is probably 6 inches across! I'm way excited to do something fun with both! 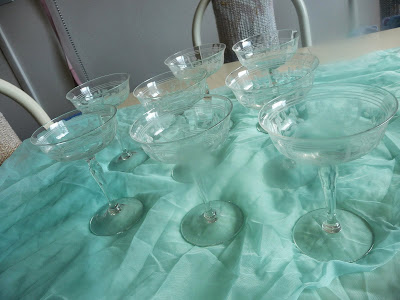 Now these are really a treasure. I saw these and asked my mom who's they were, I figured one of the daughters would get them, and that they just hadn't picked them up yet. My mom asked if I wanted them, and I told her that I would feel uncomfortable taking them before everyone else had come by to pick up their stuff. So I waited until the last day, when everything was finished and locked up, and what was left was being taken to the DI. These still hadn't been spoken for! Can you believe it? So I brought them home! 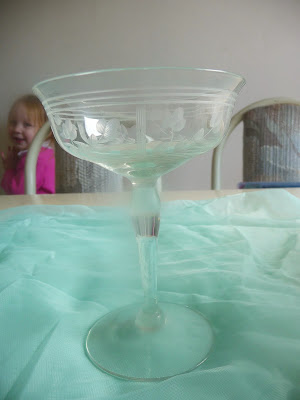 All in all, I collected a few great treasures that I'm excited to repurpose!

Stuff that happened to me this week:

Monday morning I came out when Hubby took the kids to school. I was planning on meeting the ladies I've been walking/jogging with lately. Now last week I didn't go with them all week due to a sick daughter, instead I went with my dog after Hubby would get home from taking the other kids to school. So I don't know if they assumed I wasn't coming or what...but I walked to friend #1's house, No friend. Next I headed back around to friend #2's house. No friend. I was secretly a little relieved because you know, I can't keep up with them very well! Until I got back to my house and remembered that I didn't have my keys, ya know, because I was supposed to not be back for an hour.

Now you might wonder why I didn't just go ahead and go by myself. The thing is - my dog and my ipod were locked in my house. I cannot go walking by myself without music to motivate me, and a companion to make me feel safe. So instead I sat on my front porch for half an hour in 20 degree weather and waited for my husband to get home. That night when I crawled into bed, my bum cheeks were STILL cold!

Yesterday my car broke down. If you were around last summer you know the car drama we had to deal with. So we just bought this car last summer and I was not happy. The repair ended up being about $250 - which stinks, but so far, the "fix" has held up and I'm really happy about that, because if this didn't work, that would mean it was the transmission. And we all know that "transmission" is a word you just never wanna hear when dealing with auto troubles.

Funny stuff I heard this week:

Monkey to me while I was combing my hair: "mom, I have a hypothesis."(This girl is THREE, remember!)

Monkey under her breath after getting in trouble: "I'm never having a mother, EVER again."

While I was on the phone, Tanielle to Ashie:" Eww, Ashie! Don't eat your boogies! Boogies are SATAN'S candy!"

Are you freaking kidding me?

You know I couldn't finish up here before filling you in on the latest Olympic drama, right?

So now Plushi has posted the following picture on his website: 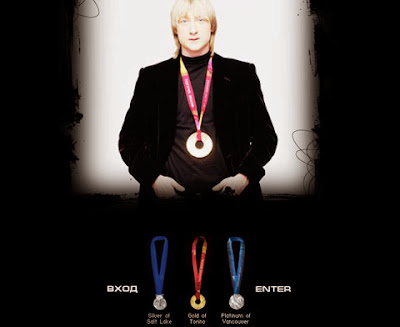 It shows him wearing the gold he won in 2006, then below has pictures representing his medals from the past 3 Olympics, with a caption under each. Here's how they read : "Silver of Salt Lake, Gold of Torino, Platinum of Vancouver.

He awarded himself a freakin' platinum medal for his performance this time! Because, as we all know, platinum is worth more that gold. I seriously might punch this guy if I ever saw him in real life.

In other Olympics news, the U.S. still leads the medals count...Yay! The Canadian figure skater who lost her mom suddenly to a heart attack on Sunday and decided to compete in her honor skated a beautiful, and emotional program last night and seriously had me bawling my eyes out. And the speed skater who finished 1st in the 10,000 meter was disqualified because he switched lanes when he wasn't supposed to because his coach was YELLING at him to switch, so confused he made the switch very awkwardly, but still finished first. the coach was mistaken and the win was taken away. How seriously sad is that? I felt so bad for him!

PHEW! All done...aren't you relieved? Now I'm off to see what you've all been up to while I was away!
Posted by Xazmin at 10:14 AM

Wow! What cool stuff you got! Um....I have no ideas - I'm not good at my own ideas....I still ideas from other people's blogs! LOL!
And CRACKING up about what your buddy Tanielle said to Ashie! HILARIOUS!!

Wow!! You got some real goodies!!!

I about died when I read Tanielle's comment to Ashie. I am SO using that one on Natalie!!!!!

What a wanny he is. Is that how you spell wanny? I don't know, oh well. I was crying right along with you during the woman's Canadian's skate last night. I just scored some awesome treasures from my gram-ma who is down sizing. You gotta love gram-ma's. There are pictures on my blog.

You really brought home some treasures! I can't believe that no one wanted those sherbert glasses! They are so pretty! The fishbowl looking vase and the brandy snifter would look cute with Easter eggs in them.

What great treasures... don't have any ideas for you because well I usually rely on others for craft ideas... still cool stuff though! I totally agree with you on the Olympic thing - that guy is no good... I think I'd like to punch him as well.

hahaha great post. I'm laughing at poor Plushi for being such a bad sport. Loved the funny things your daughters (?) said...and those glasses are BEAUTIFUL!

Ok I'll be honest I have read all of your post yet, but I did look at those pictures - beautiful glasses! My family is cleaning out my grandmother's house right now too and LOTS of pictures of things are being sent my way. Crazy times.

And dude that "Olympian" (I use that term LOOSELY!) is a JERK with a capital A. Grr! Plushi! BOOOOOOOO. Thanks for keeping us posted on his absolute LAMENESS.

I'll be back later to read the rest I have a demanding toddler at my feet at the moment distracting me. ;-)

Try etching or if you heard of Mercury paint...that would look great on the vase.

I love the glasses....they were my favorite item. So pretty...and the light turqouise net...yummy....I loved your post today.

I'm not a fan of that guy. Not at all. I LOVE those glasses though they are gorgeous!!

That dude is nuts awarding himself with a platinum award. He didn't win and he needs to get over it!

Bummer about the car, car repairs scare me too. I'm always waiting for the total!

Great treasures you found. I love all of the pretty fabrics!

I felt so bad for the speed skater. He looked devasted, as I guess I would of been too.

Hope "the fix" lasts! There is nothing like car trouble.

Hey girl! I missed ya! I'm having one of those crazy weeks too. I can't wait to see what ya do with your treasures. I'm glad it wasn't your transmission. I've been through several of those. UGH!

It feels like I haven't been here in forever! You found some great treasures at your grandma's. Those glasses are great!

I'm glad to hear that your bum finally warmed up. I can't believe you sat out in the cold for so long!

You DID come home with some great things! I have no doubt that you'll come up with clever projects to repurpose them. Those champagne glasses are beautiful. I like flutes for actually drinking champagne, but I have some of the flat, shallow glasses and I use them as part of centerpiece/arrangements: I fill them with water and float a candle in each of them.
That Olympic guy is a putz, and I am so cracking up at Monkey's quotes and what Tanielle told Ashie!

I know I'm a little late, okay really late, on commenting on this, but I missed you! Sounds like you had a very eventful time! Seriously almost peed my pants I was laughing so hard about the "Satan's candy"! TOO FUNNY!
Hey, maybe if you ever meet "Plushi" in real life, he will be wearing his platinum metal, and then you can strategically hit him over the head with that! If you do, please take pictures or record yourself on the news okay? I SO don't want to miss that!

i felt bad for that speed skater too! What bad luck...I'm sure that coach got fired!