Perfect on so many different levels - part 4

Are you all caught up on why last Saturday night was perfect for me on so many different levels?  If not you can click any of the links above.

I have loved journaling my thoughts and feelings over the past week and am so glad that I have it all written down.  I should probably do that more often.  I find myself worrying more about creating posts that people will find entertaining, rather than actually using my blog to journal my own thoughts and experiences.  It's a delicate balance, I suppose.

Are you ready to hear about the final (and probably most thrilling) reason that winning tickets to see Stars On Ice, the 10th anniversary celebration of the 2002 Olympic Winter Games was such a wonderful prize?

I mentioned previously a couple of stories related by the CEO of the games.  Love him or hate him, if you love ME, then you will love that I got to be in the house with MITT freakin' ROMNEY!!! 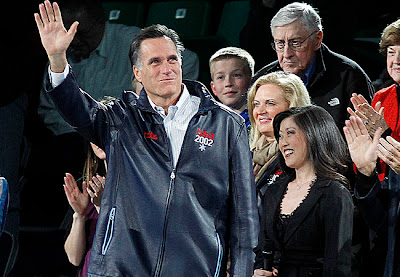 See him standing next to my girl Kristi and waving at me?  Yes, the adoration is mutual.  It's my delusional fantasy the truth!

The Salt Lake Winter Games is where I first came to know the name Mitt Romney.  He came into a mess and cleaned it up.  The Salt Lake Olympic Bid committee came under investigation for a bribery scandal (losers), and the debt was outrageous.  My boy Mitt came in and turned everything around.  He took what had basically become a disaster, and turned it into what became known as the most successful Winter Olympics ever.

And he did it under the dark cloud of the September 11th attacks on our country.  He not only had a financial mess to clean up and get back on track, but he had the security and safety of athletes and dignitaries and citizens visiting from all over the world in his hands - during an event that quite obviously would be a magnet for terrorists to try and make a devastating impact.

And he pulled it all off beautifully and created the wonderful and amazing experience that I personally will remember forever, and that I have been sharing for the past few days.  And I have loved him ever since.

A President who can turn a financial nightmare around and create a fiscal success?  And at the same time keep the people safe from those who hate us and want to hurt us?  Yes PLEASE!!

Do I care that he's richer than me and paid 15% in taxes?  Um - hello, I WANT someone in charge who knows how to handle money and build wealth!

I took some pictures for MiMi of the secret service dudes: 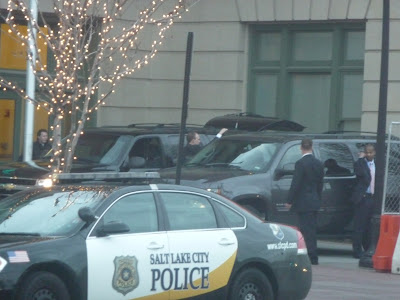 Do you think that they are talking about me, because I am on some kind of stalker list??

There were some protesters gathered.  There's like 5 people in Utah who don't like Mitt and they stood by this parking lot with their signs.  Dorks.

Mitt is often referred to as Utah's favorite son, or our adopted son (since he's not originally from here).  Everyone who actually worked with him during the Olympics has nothing but praise for his leadership, his intelligence, and his kindness.

When I heard he would be a guest at the Stars on Ice celebration - I knew I just HAD to go.  But as the time approached, I realized that it just wasn't in our budget.  I considered using funds that were earmarked for a different financial obligation, and then trying to catch up later.  But I knew that was an irresponsible choice.  The show was on Saturday, and I entered a FB contest that I saw on a friends page on Friday afternoon.  I found out late Friday night that I had won the tickets!!  I like to think I was being rewarded for making the responsible choice about purchasing the tickets with money that I shouldn't be spending.

So there you have it my friends.  All the different levels of perfection that was this amazing prize!  I don't really think I can complain about anything again for a really long time, because I got to have such an awesome experience.

Thanks for those who stuck with me through this series of long and probably way less interesting to you than to me posts.  I love ya!
Posted by Xazmin at 9:06 AM

Go Mitt!!
Thank you for the picture of the secret service!! I LOVE that kind of stuff! I'm nuts.
I'm so glad you got to see your man. :) Love you!

Yea!! So so happy for you! So glad you won those tickets and were able to go. And oh I do so hope Mitt wins.

I love him. So much. My first introduction to his awesomeness was also during the Olympics and I have anxiously (and almost obsessively) followed his career ever since. I can't wait for him to come back to Cali so I can go to one of his rallies.

Clearly you were meant to win!!! Thanks so much for sharing your joy with us:)

Oooh, I love Mitt Romney. He is the only one I truly trust to become President. With that being said, I'm so thrilled for you and your winning prize. Boy that is so exciting.

I thought that was him standing next to W in the video you posted on #2!!