It's crazy hair day at school today.  Cowgirl has been waiting for this day for weeks.  Ever since we saw the cupcake idea here. 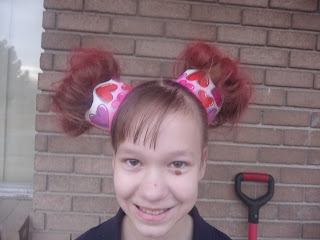 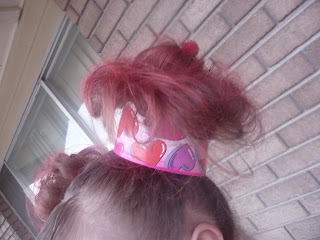 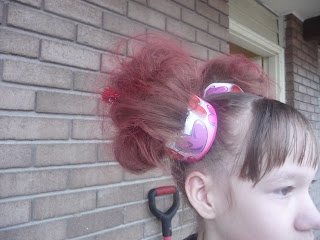 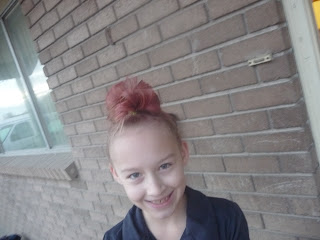 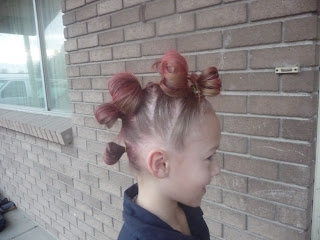 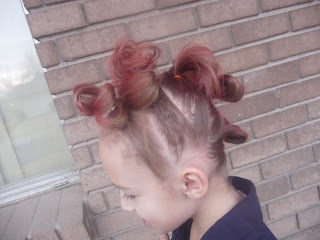 Fun stuff.  I hope they stay all day.  My girls have some pretty fine hair, so getting it to hold any kind of style is quite a chore.  I'm interested to see how it will look when they get home.

Also, what did you think of the Grammy's?

I thought most of the performances were lame.  Foo Fighters sucked (and I like them!), Chris Brown is a woman beater, so I just can't bring myself to enjoy a performance of his, Nicki Minaj's performance was highly offensive in my opinion, and I pretty much find her repulsive.

The good:  I thought Jason Aldean and Kelly Clarkson sounded decent, but his mic went out partway through, and he also looked like he was having a highly unpleasant experience.  Like he was just really uncomfortable.  Loved the Beach Boys deal with Maroon 5 starting out, and the Beach Boys to finish it.  I also loved the Glen Campbell tribute/performance.  I know that Adele stole the night.  Will you all hate me if I tell you I'm not a huge fan of hers?  Don't get me wrong, I know she's talented, but I just really don't like her music too much.  Sorry.  But she did seem really overwhelmed and sweet at all the honors she received last night.

Overall, by the end of it, I felt like I could have spent 3.5 hours doing something that was actually productive, you know, that bettered the world, or someone's life in some way?  But I didn't.  I watched the Grammy's.  And really the best part for me was LL.  He's actually the reason I tuned in.  Love me some LL Cool J.

How was your weekend?
Posted by Xazmin at 8:31 AM

Their hair looks awesome!
I never watch awards shows because they're boring...I'll catch the highlights from bloggers! :) lol

Love the hair!....didn't watch the Grammy's (although I like to waste my time on shows like that)...and
LL Cool J totally shows your age! lol

Those hair styles are so much fun!

I didn't watch the Grammys. I watched The Walking Dead instead. But I would have loved to see Adele's performance because I do love her.

I didn't watch them. I always do but I forgot. We were traveling yesterday afternoon and we didnt' even turn the tv on last night. Oh well.

Love those crazy hair styles! You're quite the talented hair stylist!!