From Drab to FAB!

This is the story of how a plain, boring brown pair of thrift store boots became a fabulous pair of dazzling go-go boots!

You may recall that last year Bookworm and Cowgirl were in our school musical, Joseph and the Amazing Technicolor Dream Coat.  Cast members were responsible for much of their own costumes.  For Cowgirl's part, one of the costumes needed was a go-go costume.

After scouring the store racks for any leftover Halloween costumes on clearance (because I wasn't about to pay full price and order a costume online), and having no luck, I realized that I was going to have to put together a costume myself.  So it was time to hit my favorite thrift store, Deseret Industries.  It took going back a couple of times (luckily it's near our house), but we finally found a shirt and skirt that fit the bill.  I was hoping for brighter colors, but you take what you can get, right?

I was still having a hard time finding a pair of go-go boots.  I wanted white ones.  Then I got to the point that I would settle for any color that were the right style.  I figured I could spray paint them white.  After many "drop ins" to the DI while out and about on my errands on different days, I finally found "the pair"!  They were the right size, and the right style (and only $5)!  It was time to pull the outfit together!

As I was talking to one of the moms at rehearsal one day, she mentioned the word "glitter".  And the heavens opened...and the angels sang.....

So after looking at some different ideas online, and determining the drawbacks as well as the benefits of each of the methods suggested, I came up with a plan.

I first took the boring, plain brown boots and coated them well with a couple of layers of metallic silver spray paint.  I stuffed newspapers inside of them to keep them standing upright and filled out.  I let them dry overnight. 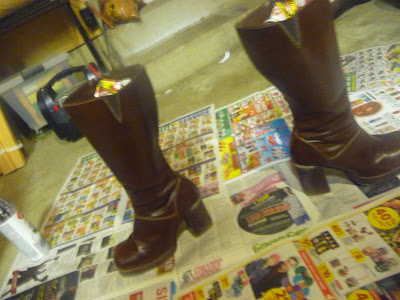 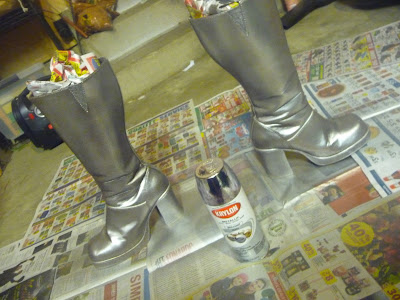 Next I mixed together a concoction of regular (not fine) silver glitter and my favorite - Mod Podge!  I just dumped a bunch of glitter in a cup, then poured in some Mod Podge and stirred it up.  I kept doing it until the mixture got to a pasty consistency that would spread easily and not be too clumpy, but still had a thick concentration of glitter in it.  It really would be hard to get it wrong. 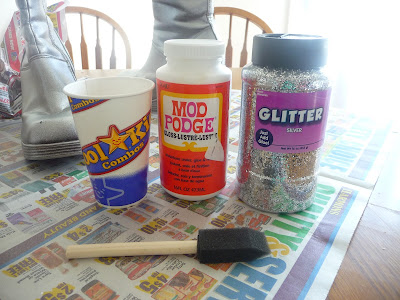 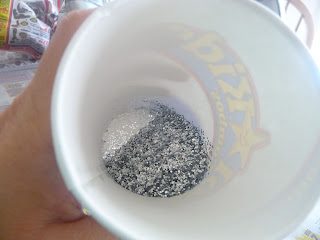 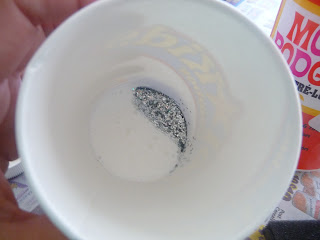 I painted my first layer of glitter podge all over the boots, being careful to try and avoid the zippers so they wouldn't get glued shut.  After they had time to dry for a little bit I could see the spots that were a little bare of glitter.  I went over the boots another time, paying special attention to the bare spots. 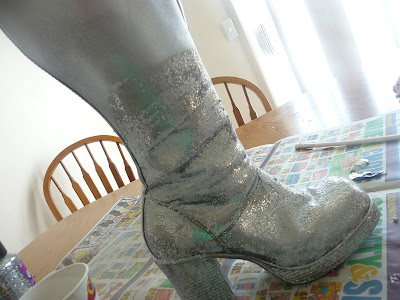 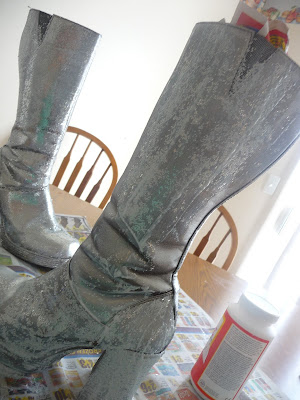 Once they were all dry I touched up any spots that still looked like they needed some sparkling up and Ta-Da!  A fabulous pair of sparkling go-go boots! 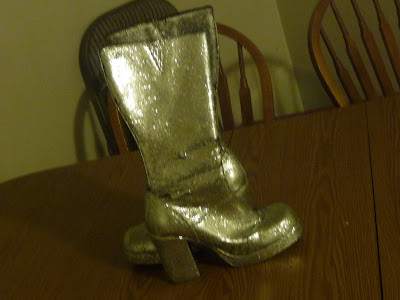 I decided that Cowgirl needed some go-go accessories to tie the whole outfit together.  So we made a belt and some big earrings by cutting circles out of poster board and repeating the spray paingint/glitter podging process used on the boots.  I LOVED how her costume turned out, and we got so many compliments on the boots and the accessories!

Yes, I totally cropped other people out of the photo! (Including her brother!)


It's like I always say, "Everything is better with glitter!"

Have you transformed anything from drab to fab lately?  I'd love to hear about it!

I'm sharing this project over HERE today!  Check it out to find more fabulous projects!
Posted by Xazmin at 1:18 PM

Love it!!! That costume is incredible. Seriously, spray paint was one if the greatest inventions ever.

I love what you've done here so much, like you say, this turned it from something quite dull and boring to something absolute fabulous, this is just awesome, she's rocking those silvery cowgirl boots!

So cute!!! She looks adorable. I need to try that modpodge and glitter tip. I would LOVE for you to share this at "That's My Style" Link Party going on TODAY on my blog. Not comfortable sharing? Stop by anyway for beauty related post and fun DIY projects. I hope to see you there! :)