Friend Making Monday - have you ever?

Today I'm linking up with Kenlie for FMM - it's how I first started making friends in the blog world, years ago.  Those friendships are still in place today, and some of them are with friends who don't even blog anymore!  So it's definitely a great link party to be involved with!

1. Jumped out of an airplane? Nope.

2. Lived alone? Nope.  I got married at 19.  I went from living with my parents to living with hubby.

3. Met a celebrity?  Yes I have.  When I was 17, my High School's Senior Dinner Dance was held at the Marriot Hotel.  It was durning the NBA playoffs and the Houston Rockets were playing the Jazz, and they were staying at the Marriot.  My girlfriends and I saw a golden opportunity and we jumped into an elevator with Hakeem "the dream" Olajuwon!  He was actually very nice and down to earth.  Friendly, and interested (at least he acted that way) in our school, and our basketball team and was just very nice (not in a creepy old man hitting on teenage girls way). 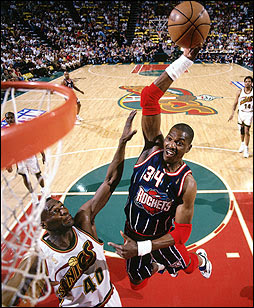 Of course I have met many members of Real Salt Lake.  Not celebrities to some people, but our goalie Nick Rimando, and our team captain Kyle Beckerman (I have met both) played on the U.S. Men's National Team that just won the Gold Cup a couple of weeks ago. 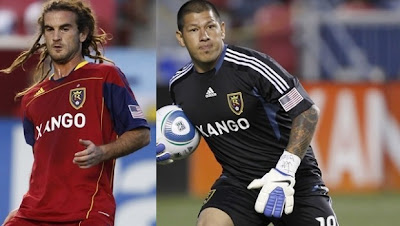 4. Said something to someone that you immediately regret saying?  All. the. time.

5. Had a manicure/pedicure?  Yes, but it's actually not my favorite thing.

8. Been outside of your home country?  Well, when my family went to Disneyland, we also visited Tijuana.  I'm not very well-traveled. :/

9. Kissed your best friend?  Every day.

11. Met someone online?  Yep.  All my blogging friends!

16. Been caught making out by a policeman?  Not that I can recall.

18. Handed out candy on halloween?  Of course.

22. Regretted saying "I love you" to someone?  I guess I probably said it to a loser or two, so yes.

23. Finished a meal in a restaurant and realized you didn't have your wallet?  No.  I almost never pay - that's the Hubby's job!

24. Shot a gun?  Yes.  It was for a simulation I got to participate in that was through the FBI and taught by a SWAT sniper.  It was super cool!

So there you go.  Want to play along?  I'd love to read your answers!  Go link up if you want to play!

Tomorrow I'm going to show you how I turned a pair of plain brown thrift store boots into some FABULOUS glittery go-go boots for my daughter's role as a go-go dancer in the school musical!  You won't want to miss it!
Posted by Xazmin at 10:31 AM

Lol! Love it! If I was playing, I think I'd have answered all of the questions exactly the same as you. Although I have never been to the opera, and I was on TV. That's it! Is there a mama out there who hasn't eaten food off the floor? That's what I'd like to know! :)

What fun questions! And your answers are awfully similar to mine. A hickey is when ... Wait, you know, right? :)

Love all of the answers to these questions Xazmin, especially how you watch the Real Salt Lake team all of the time, congratulations on the Gold Cup win too. Great questions all around and answers too.