If you live in Utah you have that song in your head now! That's the theme for one of my favorite places in the world. And we took our family there yesterday.

I have so many fond memories of this place. When I was young, my best friend's dad was a mechanic for Lagoon. They were able to go free of charge, and she would often invite me along. We had soooo much fun!

I remember riding the ferris wheel and when we were at the top, yelling out boys' names randomly, and seeing if anyone would look up. If we happened to get a boy to look, we would wave vigorously as if they should know us, just to see if they would wave back!

We also thought it was hilarious to stand in line and speak animatedly in a different language just to see if people would stare at us. The thing is, we both took different language classes, so she would speak to me in Spanish, and I would speak back in French. Neither of us knew what the other was saying...but we pretended we were having a conversation!

One particularly funny memory I have is when we were at the picnick pavilion, where tons of people were eating...my friend chewed up some BBQ potato chips and then mixed them with orange soda in her mouth...then she made gagging noises and pretended she was puking into the bushes. I know that is so gross, but we were in middle school, okay? A lot of girls our age were doing MUCH worse things than that!!

Then of course, as a teenager Lagoon was the best date spot. I have kissed a couple of boys at Lagoon - including my husband - on the Colossus! I wish I knew where that picture was so I could post it. If I find it, I will!

Hubby and I actually bought season tickets the first year we were married, and spent so many fun summer days and evenings riding all the rides and making wonderful memories.

Do you get the idea that I LOVE Lagoon?

We have only been a couple of times since having kids, because taking a whole family is a lot more expensive than just the 2 of us...so this was such a treat for us to share one of our favorite places with our kids, especially since some of them are old enough to go on the REAL rides now!

I was so lame and forgot to bring my camera, so I don't really have any good pictures. But I couldn't resist taking this one of Monkey with her jumbo corndog on my cell phone. 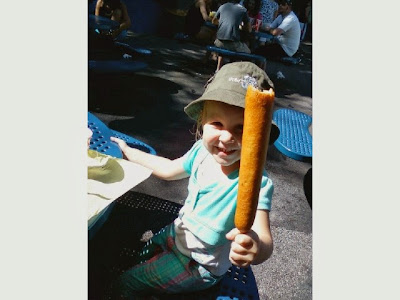 As I said, we've only been a couple of times since having children, and they were too small for us to go on any roller coasters...which I LOVE! So it had been over 12 years since I had ridden a roller coaster, and I was a little nervous that I wouldn't be able to handle it in my old age.

But I conquered my fear, and took my girls on the Colossus (where I kissed their dad!), and found to my delight that I still loved it! Yay! Cowgirl also became a fan, but Pixie - not so much. 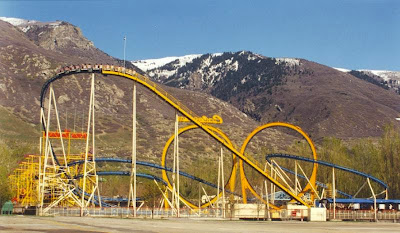 The Colossus Fire Dragon - one of my favorite rides.
I was nervous and excited to try out one of the new roller coasters - Wicked. Unfortunately I didn't get the chance. Cowgirl was a little nervous to try it, so I sat off with her while Bookworm and Hubby went. I can't wait to go back and have my turn! 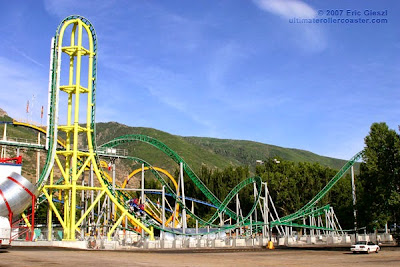 Wicked
Here's a little video and I like to watch it to "prep" myself for going on the thing. I'm still a little nervous...but we're headed back on Monday and I'm determined to ride it!

Everyone had so much fun. My mom came with her friend and her friend's grandson, and Monkey went with them and they rode all the small rides and she was loving it! She can't wait to be big enough for the "big" rides!

There's much more than roller coasters, and we had so much fun enjoying the day together as a family. Truly worth every penny.

I hope everyone has had a great week!

One more reason why I wish we lived closer together! I LOVE roller coasters! That would be so much fun, to go and ride the BIG rides together! Roon and I have loved our Six Flags season passes this year, even though we've only been able to ride the biggest rides a few times. DEFINITELY a wonderful thing to do as a family! Glad you had fun, and didn't find out you were too old for 'em! That would have been sad!

We don't have anything like that place within 500 miles of us, I don't think! Sucky.
I'm glad you had fun and that you get to go back!
Also, I used to make up my OWN language in public places. I know.
I was cool.

What fun!!! We have something similar near Richmond, and it's such a blast. Haven't taken Michaela Byrd yet. I had a friend that we would speak in a gibberish language that sounded a lot like German/Slovac, just to see if people would notice. :)

Those roller coasters make me want to hurl! They look fun by motion sickness would do me in!

My hubby loves roller coasters....he loves Six Flags and anywhere else there is a one....I don't ride them. I have vertigo and they make me sick as a dog. We go to Six Flags often...always take someone with us...he rides...and I love just people watching, the music, etc...so it works for both of us. Glad you guys had fun and I love the corn dog picture. Sheesh..that corn dog is as big as she is. Tell me she did not eat the whole thing.

Haven't been to Lagoon in ages!
I am not a ride fanatic, in fact it was at Lagoon that I had to have them stop a ride and let me off! I was on a date. Quite embarassing, to say the least.

What fun! We always got season passes to Disneyland when we lived down there! Great to go when almost no one else is there.

Roller coasters I can handle, anything going round & round not so much! That looks like a blast & seriously what a fun place to take your kids... especially since you kissed their daddy there so long ago. I bet your oldest daughter thought that was pretty neat!

I LOVE roller coasters...except when they go upside down. I don't know what it is about that, but it makes me soooo sick to my stomach. My hubby says it's all in my head. Totally could be. I make a lot of things up in my head. :P I'm glad you're having some fun!!! Hope you're having a great week!