I Get That All The Time

Hello friends! Well, whatever friends I have left! I haven't been very good at getting around to visit. And my comments from visitors keep getting fewer and fewer! I know I have been such a boring blogger lately. My apologies.

Today I actually have something cool to blog about. I've been kinda excited to share something with you. I hope you think it's cool too. If not, well - I'm still excited to talk about it! 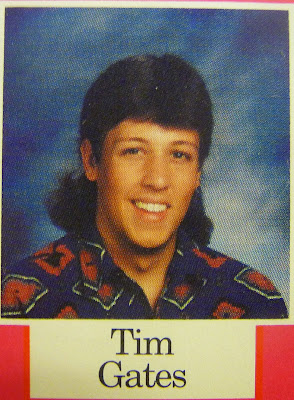 Pretty cute, huh? Okay, okay I know...the hair! But it was the 90's and he was a cowboy. ANYWAY. Tim and I went to high school together, he's a year older than me. One of my first memories of Tim is a performance he did for an assembly. He performed The Thunder Rolls by Garth Brooks. If you know that song, well then you know it's an awesome song. I remember sitting there in awe thinking "Wow, this kid does it better than Garth". Really. He was that good. And he was like 17, maybe even 16. Tim always performed at our assemblies and talent shows. He even put out a couple of tapes that he sold at the school. I think it was for a charity - I bought them both. Tim also dated my friend Karmen for a while.

Fast forward 16 years. I have always wondered about Tim, and wondered if he was still singing. That was always his dream, to be a country music recording artist.

Well, once we were FB friends, I checked out his page. Turns out he married another girl from our high school. I noticed the section "videos of Tim"...so I thought I'd check that out first. The video that drew my attention was "I Get That All The Time - Official Music Video". Turns out Tim is in a group named Due West with 2 other talented guys, and they are releasing an album soon. This is the first single. Please check it out, even if you aren't into country music. Pretty sure you'll love it as much as I do! Tim's the one on lead vocals.

Aren't they great? I love his voice. I was so thrilled to find out he's still chasing his dream, and well, actually living it! I wanted to spread the word. I hope you will too.

I know not everybody's into country music. I'm generally more of a pop/rock girl myself...as those of you who have been following me for awhile are well aware. I forget how much I really love country music, because I don't make a point to listen to it very often. But when I do hear it, I always love it. If you don't consider yourself a fan...give it a chance - you may surprise yourself! The Carrie Underwood Christmas Special last night was about the best thing I've seen on TV this whole year!

I'm not sure when Due West's full album will be released, but I'll be following closely and updating here! I hope I've found a few fellow fans today. If you loved them like I do, here's a couple of links for ya.

Due West's Website - here you can listen to several more tracks from their album.

Just so we're clear, I am receiving no monetary or other compensation for this post. I'm just really excited to spread the word. I think they're gonna be big. HOWEVER, if they read this and wanna comp me a couple tickets to a concert when they go on tour, I wouldn't be opposed!

I'm gonna be a better friend and come visit y'all this week! Don't give up on me! Love ya!

That's so cool!!! I really love country music. I think they're pretty amazing. I'll let my hubby hear...he's a HUGE fan of country music. So cool that you knew him from HS. Our claim to fame is that Carrie Underwood grew up in a town about 40 minutes from where we live and went to college at another town about 45 minutes from where we live. We love her! Her Christmas Special was FABULOUS!!! Keep us posted about Due West (cool name, btw)!! I'm gonna go fan them on FB.

Very neat and I am not much for country music but I Love your friends voice and that song, what a talented band

That is way cool! And thanks for reminding me... I dvr'd that Christmas special! ;)

Wow! I loved it! I'm a country girl and they are really good! I'd buy their album. Off to check their site. :) Great message in the song, too. :)

Wow, that's so cool! They do have a good sound!

I've been a bad bloggy friend too...missed ya! Sorry I haven't been around much.

Okay I am officially a fan now!
I am a converted country music fan.. used to hate it but it is what my husband has always listened to.. so the last several years I have switched over and that song is awesome!

HOLY COW! They are AWESOME!!! I'm a country fan anyway - but still - they are great! I sent their website to a friend of mine, who gets all the fair concerts and entertainment together. I told her she should invite them to play at our fair! How cool would that be?

Wow. That is awesome! He has a wonderful voice! Sorta gives me chills.
And, yeah...thank God he got a stylist or someone to fix his hair. Yikes.

It seems to me, you are a good friend. And good luck to your friend. I grew up in the south, I still have a lot of friends there I talk to on facebook regularly. I'll spread the word. It's nice to see the seemingly unattainable be obtained.! :)

Oh how wonderful. They really are good and I know their album will be a huge success. Isn't it wounderful to reunite with old friends and classmates. Thanks for sharing. Hugs, Marty

Wow! That was great! That is so cool you all are friends on FB now. I think they will be big soon! ;o)

I love that song!!! While rock music is my roots...my heart is in country too. Of course my cowboy listens to it, but it is also my oldests favorite type of music. You just cant help but be taken to another place when you listen to country

Hey you! No worries...things have been crazy here too. :) How cool that you know a singer who's about to make it big! They have great voices. :)

I'm a country music lover and I like this song too, greta find X.

Wow Xazmin, thanks for sharing that! That was really nice and I love the message in the song. I do love me some country music, and I think this would be great to add to my collection. Isn't that great when you know someone and see where they have gotten with their dreams!

Love that song, and what a great group they are. Thanks for sharing. Nice to hear a positive song about families and marriage.

I love the song! How awesome is that, that you know him! Very cool!

I love that! He has a great voice! Thanks for passing it along! Nice to see you, again! Long time no see!

That is so cool!

On an unrelated note, who are you pulling for in SYTYCD this season? I'm so bummed it's already the finale next week and my fave is gone.

I have an award for ya!

SPEAKING FROM THE CRIB said...

that is totally super cool! no one from my school made anything of themselves. that i know of. unless you count me, of course.

thanks for visiting over at the crib!

that is just toooo cool! That is great that you came across him again! They sound GREAT!