What are you watching?

Holy crapola, I know! It's been a while right? It was a lifesaver this past month to get slammed with Halloween orders for Ribbon Blossoms - but it sure did keep me away from my lovelies (that's you guys), and THAT, my friends, is never a good thing. How the heck have you all been?

One of the things that kept me sane during hours and hours of "stuff-making" was the company of my trusty television. I thought I'd reward her (yeah, I've decided my TV is a girl) by spotlighting her here on my blog. I know, right? What better way to make my grand re-entrance into the blogosphere than share with you my fall TV review. I know you're just waiting on the edge of your seats to hear my opinions.

Many people are surprised to find that I do not have DVR, nor do I have satellite or cable TV. Dark ages, I know. But interestingly enough - even with just basic broadcast antenna - there is still a plethora (bonus vocab word of the day for ya) of quality television programs for me to get addicted to watch.

So here's my review this years fall TV shows - both old favorites and new addictions: 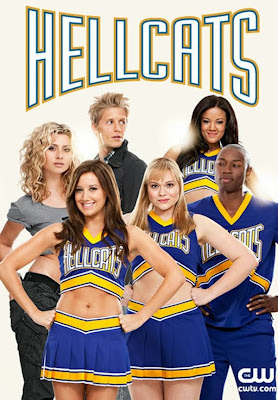 I had NO desire to watch this show. It looked like a lame, petty cheerleader show that would be shallow and skanky and nothing I would be interested in. Turns out it's actually a lot of fun to watch, and the characters are interesting, endearing and very well constructed. It is about Marty, the "anti" cheerleader, a broke law student who spends her limited free time ridiculing cheerleaders, or as she calls them, "football groupies" and other such superficial girls. When Marty loses her scholarship and exhausts all other avenues of paying for school, as a last resort she tries out for the cheerleading squad - a cheer scholarship her only hope for staying in school. She joins the squad and learns that there is more to these girls than she knew. She makes both enemies and friends, and coupled with the underlying romantic subplots, I give the show 2 thumbs up - very fun to watch, great characters - and Alyson Michalka and Ashley Tisdale are absolutely adorable in it! 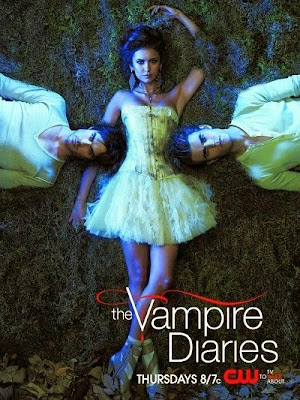 Another show I had no intention of watching - I accidentally got sucked into it last season when I was working on something, and the TV was on and I was too lazy busy to get up and switch the channel. I thought it was just some rip-off of that other vampire-y obsession going on around the globe these past few years. Turns out the book series "The Vampire Diaries" actually came out YEARS before the Twilight series. Either back in the 80's or 90's - can't remember which. This show is just a guilty pleasure. It has beautiful people to look at, teen-angst filled romance, action/adventure - suspense. Just an all-around nice distraction from real life. And as my dear friend MiMi often tells me, "Damon is hot". 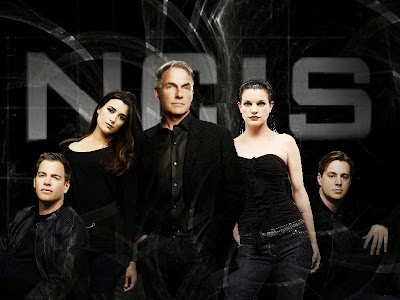 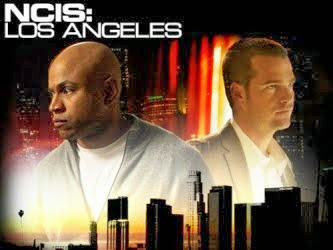 NCIS is just one of my all-time favorite shows. I LOVE action/adventure movies and shows. I love cop shows, military shows, spy shows - I just love 'em. I have watched every single episode of every single season of NCIS. It has such a fantastic ensemble cast - the characters are smartly written, and the on screen chemistry between all the cast members is just wonderful to watch. The story-lines of the shows are really secondary to the relationships and interactions of the characters. I can't say enough just how much I love this show. Which is why I was stoked to learn of a spinoff last year - the Los Angeles version. Featuring Chris O'Donnel and L.L. Cool J (LOVE him!), I was super excited to watch. And I was not disappointed. The show is great and I look forward to watching every single week. 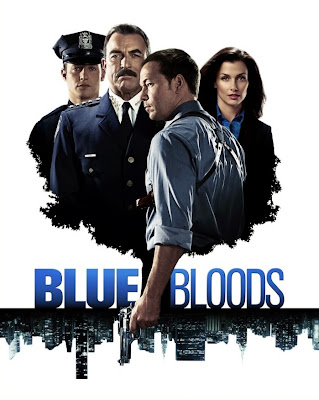 Okay, I had EVERY intention of watching this show when I heard about it. I mean seriously - what could be better than a New Kid On The Block....AND Magnum P.I. keeping the upstanding citizens of New York safe from criminals of every variety? Starring Donnie Wahlberg (LOVE) and Tom Selleck (also LOVE) as well as several other recognizable names, Blue Bloods is about the Reagan family. With grandpa - retired NYPD, Father (Tom Selleck) and NYPD Commissioner, sons and police officers Danny (Donnie Wahlberg), Jamie, and another son killed in the line of duty, daughter Erin - Assistant District Attorney, and several grandchildren - this shows the cases they work, and the relationships and interactions they have as a family. I adore this show - and was overjoyed to learn it has been picked up for a full season! Yay!

Okay - this is a revamp of an old favorite that had the potential to become a new addiction. Sadly, this wasn't the case. It is a sort of reinvention of the story, with some of the same characters from the original TV Series La Femme Nikita - which I used to love. I watched 2 ep.s of the new Nikita and was not impressed. I don't love that the character's characters are so different than the characters I loved from the previous version. I know - I'm sort of a traditionalist like that. Anyway - no Nikita addiction for me.

And I have saved the BEST for Last! 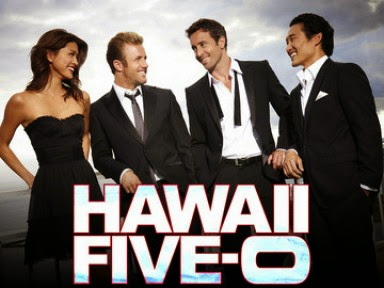 I never watched the original - but know that my mom enjoyed it, and I remember it being a big hit. I first decided to watch it for Alex O'loughlin - I loved him on the short-lived series' Moonlight, as well as Three Rivers - so when I heard he was in a new cop show - I was all for it. And I have to tell you - it is my new favorite show. I love it. I love the rest of the characters, I love the beautiful scenery, I love the stories, and love, love, LOVE the onscreen interaction and chemistry of the characters. I hope this series is around for a long time to come - because I'm lovin' it!!

So there you have it my friends - everything you need to know about the fall TV lineup on basic, broadcast antenna. Do you feel like you wish you could get back the past 3 minutes of your life? What are you watching?
Posted by Xazmin at 5:15 PM

I haven't seen any of those shows until you got to Hawaii Five-0. Hubby and I make a point to watch it every week.
I thought they switched everything over to digital or whatever, and that regular old TVs didn't work anymore without cable or satellite?

You, my dear, have just made up my summer viewing schedule. A list of shows that I must watch online or via Netflix during the summer to get caught up before the next season starts.
I hope you're proud of yourself.
Love yer guts! I hope this means you're REALLY back...

I haven't watched any of those shows, I might have to watch a couple of them.

Don't feel too bad. I don't have a DVR or a satellite or cable either. I think people pity me, but hey, just like you said, there's a plethora of TV programs out there to watch on regular broadcast!

NCIS is my absolute, favorite show of all time. And Mark Harmon/Gibbs makes me drool everywhere LOL! I occasionally watch NCIS LA, but it just hasn't grabbed me yet. We do have satellite and DVR and I could not live without them (well, I could probably survive, barely, without the DVR but it would be merely existing). Of course, we live in the middle of the woods and would get nothing with an antenna. I justify my satellite bill by stating we never go to the movies or doing other entertaining things and this is my entertainment.

I had no idea what Hell Cats was until I saw the photo you posted. Before I read what you wrote, I got all excited b/c it has cheerleading. How lame am I? ;)

Vampire Diaries is one of my FAVORITES!!! Love me some Damon...love!!! I think Elena is so pretty.

I do love my TV so dearly.

I LOVE Donnie Walberg. LOVE.
I forgive him for NKOTB. Hahahahahahahaa!!!!

Good to see you posting!! I was just thinking about you! Hellcats sounds pretty good. I have trouble fitting new shows into my TV schedule, because I already watch so many shows! My favs right now are DWTS, Biggest Loser, Grey's, Private Practice, and Modern Family.

Hope you're having a great day!! Love ya!♥

I am horrible at watching anything regularly on tv....my only cant miss show? Desperate Housewives

Monday night I have bible study so I miss Hawaii 5-0...but I know I would love it. I do watch the NCIS's on Tuesday night. I don't do TV on Weds. and Thurs. I have watched Blue bloods and liked it. I have given up trying to catch a series...so I watch the food channels - Chopped and Diners, Drive Ins, and Dives, Unwrapped having an hour commute in the morning...means early to bed and early to rise...so I am not very television wise.

I have a friend who has been trying to get me to watch Vampire diaries forEVER...I may give in now. LOL

And I am totally interested in Hawaii50! and now...hellcats too...Totally didn't realize that was Ashley Tisdale....for reals that brown hair throws me off!!

I am a TV junkie. I DVR & watch as much as I possibly can. Sad I know. I love NCIS Los Angeles, Totally digging Hawaii Five-O, which I did not expect to like at all. HUbby started watching it & I happend to catch it & have watched them all. One you didn't mention was Chase... I am really liking that one!

I'm a dork about what I watch. I do have a dvr, and have about an hour a night. I dvr three shows. Oprah, Roseanne and Ramsay's kitchen nightmares. Imma dork.......

Sooo glad you've been getting lots of orders, but we've all missed ya! I can't believe you don't have a DVR. I don't know what I did before the pause button! I've gotten so used to it that I try and pause the radio sometimes. DUH!