If losing the CONCACAF championship in the final leg was a devastating disappointment, what happened Saturday can only be described as crushing. Tragic. A crippling blow to Real Salt Lake.

Javier Morales. Midfielder #11. In the world of Major League Soccer, his name is well-known.

One of the most talented players in the league. And undoubtedly THE best player on our team.

The stadium erupts in thunderous applause and yelling whenever his name is announced in the starting line-up.

His exciting plays ALWAYS energize both the fans, and his teammates.

Not only is he admired for his skill on the soccer field, but those who know him are quick to share that he is a great footballer, but an even better person. A good guy. A class act.

Today he lays in the hospital, about to undergo surgery.

A reckless tackle early in the game left him on the ground in pain, unable to get up. He suffered a dislocated fracture. Or in other words, a broken tibia, a broken fibula, and dislocated ankle, as well as torn ligaments.

The game came to a standstill for nearly 8 minutes. There are no time-outs in soccer. But you can’t play when the field is full of medics.

The foul takes place just past the 2 minute mark. In the highlights, between 1:58-2:55, you can see it all unfold. We run the gamut from a promising play, to a disastrous injury, to a furious team captain, to the disheartening image of our star play-maker being wheeled off the field to an awaiting ambulance. I have never, ever seen our captain Kyle Beckerman (# 5, in dreadlocks) lose his cool like this. I’m surprised he didn’t throw a punch. You really should check it out. (link here if video doesn't work)

As awful as it was for us fans to watch from the stands, wondering what was happening, and then seeing him wheeled off in a stretcher, I can’t imagine what it must have felt like for his wife and young son.

There is another short clip of the incident here, but I warn you, it is from a different angle, and much more graphic.

I’m not sure how much more our team’s morale can withstand. I realize that soccer is just a game. But for these players, it is their passion, as well as their livelihood. They’re not multi-million dollar-salaried athletes like other professional sports figures. In fact I would be willing to bet that I have some readers whose household income is greater than the salary of our highest paid player.

The team managed to pull themselves together enough to take the win, teammate Will Johnson scoring the winning goal, and of course dedicating it to his friend and teammate. But the team was visibly shaken, and the victory was bittersweet.

Javi will be out for the rest of the season, but fortunately is expected to be able to come back to the game. In the meantime, he is not a player who is difficult for us to replace – he is a player who is impossible for us to replace. We have a team full of talent, but Javi is undoubtedly one of a kind. His fire and skill will be missed greatly. But I do feel we have a team with incredible talent – enough to continue a winning season. If only they can get past the discouragement that has currently settled upon their collective shoulders.

For now I (along with thousands of other RSL fans) send much love and many prayers the way of Javi and his family.

The field will not be the same until #11 is back making plays. 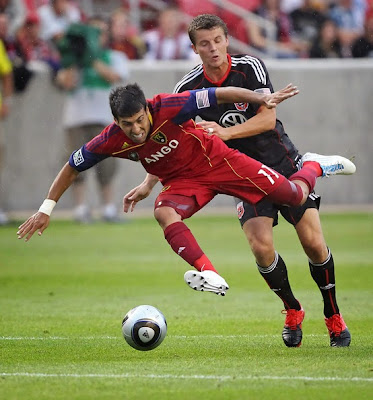 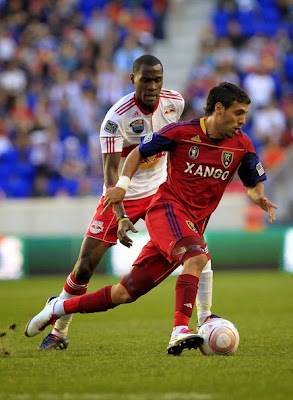 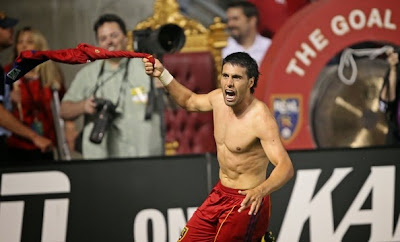 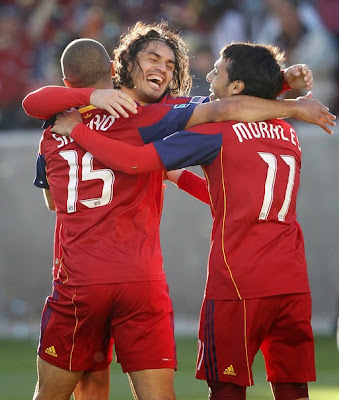 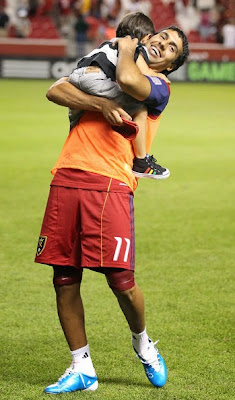 p.s. I had not intended to make another soccer post so soon, but I had to get it down while it was still fresh as this blog is not only a way for me to keep in touch with you fab bloggy friends, but is also my journal.

That last picture is adorable.
I had to click the link to watch because for some reason I couldn't see the one you posted.
HOLY CRAP BALLS every orifice of my body slammed shut looking at that!!! UGH. OUCH. So bad.
That guy completely swept his legs out from under him.
I saw the dread guy walking very purposefully towards that guy...he looked and saw that the guy that got hurt was being tended to and made a beeline for the jerk. LOL

Okay, just watched the one you posted. BECKERMAN!!! I love that guy. That's awesome. Um. The one Chivas guy or whatever that team is called...they should be called Corona (lol) is OLD.

Bless his heart! I cannot even bring myself to watch the video after reading your description. It's like watching a trainwreck on purpose. Nope. Can't do it. I sure hope his surgery goes well. Praying for healing and comfort for him and his family.

I haven't watched the video yet, but I've been concerned about him ever since you posted about it on Facebook. My heart and prayers go out to his family!
I hope his recovery is swift and complete.
Great post, Chica!