Mother Nature - sometimes we take her power for granted

I'm supposed to be working in the basement. We have a dumpster coming today to put all the crap in that we're getting rid of. Instead I've been glued to the tv all morning, and most of last night.

There is a huge wildfire burning the mountain behind where I grew up. I used to ride 4-wheelers in the foothills. My parents still live in that home. They are safe, as is my childhood home. But I have many friends who have been evacuated, and are uncertain of the safety of those homes. Over 1400 homes were evacuated last night.

4 homes have burned, which is a small number, but still devastating for those families. It appears that the fire has been contained now and some people furthest from the fire have been allowed back into their homes, but many are still unable to return.

Still, what a blessing that things aren't worse - this morning is much brighter than last night where disbelief and fear prevailed. The Unified Firefighters who have been on the mountain since yesterday afternoon were just called the best in the nation by the governor. There have been NO injuries or deaths to locals, and firefighters have only sustained some minor, job-related injuries.

I just wanted to share some incredible pictures that were taken by a dear family friend, and neighbor to my parents, Bob Lieshman. 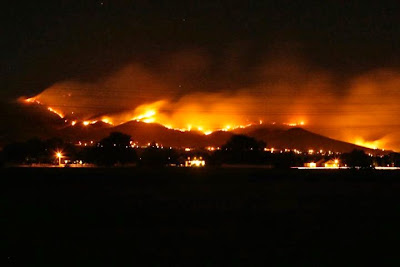 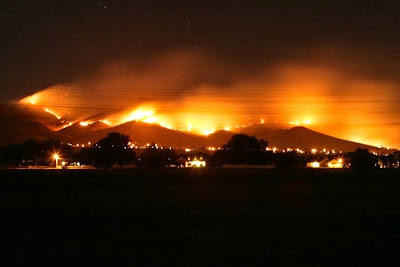 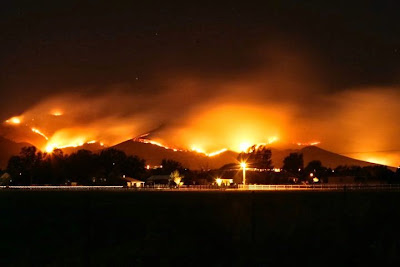 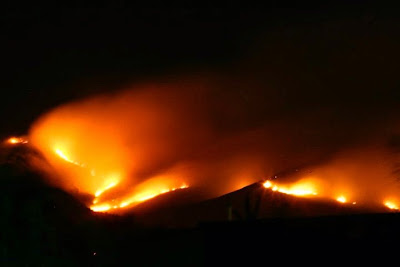 We sometimes forget the sheer power of Mother Nature. We really are no match for her!
Posted by Xazmin at 8:22 AM

Oh my goodness.. There was just fire in my neighborhood last night! I posted about it after the FD got it put out http://raisingbaby2009.blogspot.com/2010/09/im-feelin-hot-hot-hot.html

I've been watching this on the news all morning. Scary!

So scary. I'm glad to hear your parents are safe, but sad for the families who lost their homes. :(

Glad to hear your family is safe...forest fire is scary to me. We experience them here often....on a much smaller scale. Take care and keep us posted.

It's been a scary fire! Glad your family is safe.
Fire is treacherous and unpredictable! My dad is a retired firefighter and I think he was wishing he could throw on his turnout gear and go help battle the blaze!
Glad it looks to be somewhat under control now.

Those pictures are beautiful. I'm very sad at the damage and loss that is associate with them though!

I didn't know until just a minute ago that Roon's cousin and wife had been evacuated from their home because of that fire! Their home is safe, and they have since been let back into their neighborhood, but it's pretty scary when it hits so close to home.
I'm so glad it wasn't worse.
AMAZING pictures!

Oh my sake Hon! How awful! I really hope everyone stays safe out there. I hate wild fires...those words give me chills.

I was reading about the fire this morning! That's so awful! Praying it is out soon!! What exact part of Utah is it in?

Very scary and something I know about all too well!

@ Jennykate77
It is in the southern part of the Salt Lake Valley. Scary is not the half of it. We still have loved ones waiting to see how much damage has been done to their homes. They were given about 20 mintues to grab what they could before evacuation, all those memories... <3 to my Riverton and Herriman freinds and family.

So scary! I am glad your parents & their home is ok. I feel for the people whos is not. Such a sad thing. Amazing pictures though... odd how something so horrific can be so beautiful huh.

It has been crazy. I'm one of the many that live out here & were evacuated. My hubby & I were supposed to be celebrating our 10th anniversary & instead we were running through the house gathering our precious pictures & important documents. So very grateful to our wonderful fire fighters, police officers, & local officials that have put in countless hours in efforts to save all our homes. We watched as the fire rolled down the mountain literally feet from some homes & they were able to fight it off. It's a miracle that only a few homes were engulfed. My heart goes out to all of them. Just the thoughts racing through our minds as we gathered our things were enough to break me down into tears. I just pray that those families are able to recover from this horrible event.