Starting the school year off right!

How many 8 year olds can say that they've shared the ice with an Olympic Champion?  AND in the same building he won silver and gold medals?

Thanks to the amazing Discovery program at her school, Pixie now can!  She signed up for ice skating this session, and has learned figure skating, speed-skating and hockey.  The ice skating class takes place at the Utah Olympic Oval, which was built to host skating competitions for the 2002 Winter Games, and is just down the street from our school.  We are very fortunate to have enjoyed a wonderful partnership with the oval, since before we even broke ground on our building.

Yesterday the kids had the opportunity to train with Derek Parra!  If you don't know who he is, you're probably not obsessive about the Olympic Games like I am, particularly the ones that took place right in my back yard!  It's been over 9 years, but it still feels like yesterday!  Anyramble, Derek won Silver and Gold during those games, and he often comes back to take part in some of the programs the Oval runs.  Including Pixie's Discovery class! 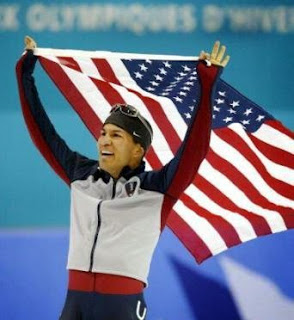 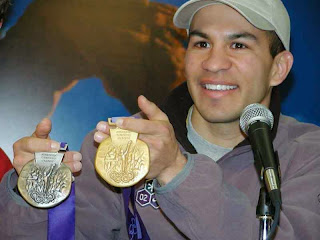 He was even cuter in person, and seriously the nicest guy!  He was so good with the kids, and patient and funny.  Pixie had a blast, and it was such a thrill for me to get to watch her have this opportunity. 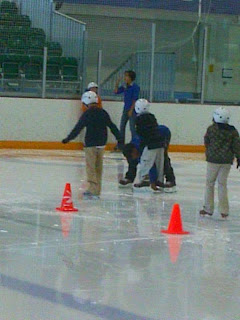 He wasn't too good to get down and help fix the laces of a little boy's skate. 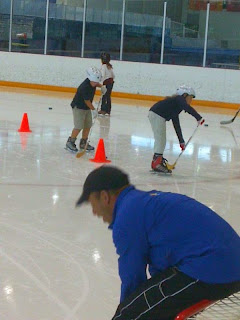 Or let a little girl "score" against a champion skater.
Then he taught her how to do a little victory dance - with singing and everything. 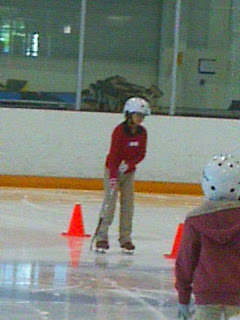 Here's pixie practicing taking the puck around the cones. 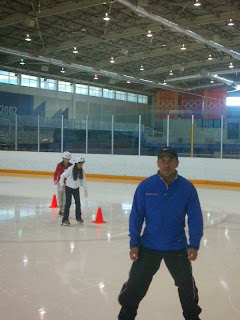 And practicing her skating maneuvers.  Derek just skated right into the shot at the moment I took it! 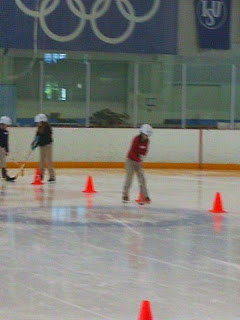 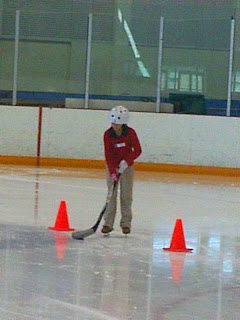 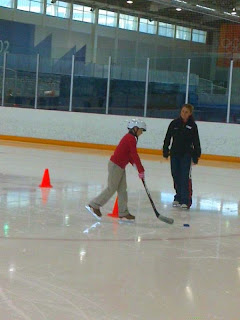 Sorry for the low-quality dumb phone pictures.  I forgot my camera.
Tomorrow is Cowgirl's last class for this Discovery session, and she has been in heaven being able to train at a local stable, and take horse-back riding lessons.  Of course now she asks me for a horse for her birthday next week like every 5 minutes.  I'll post pictures of her riding soon.

In the Middle School there is no Discovery (despite my best efforts).  Instead we have our Adventure Program, where the students go out into the outdoor classroom overnight, or sometimes a few nights - and do fieldwork and their classroom learning in the natural world.  It's very cool.  Last week Bookworm and Hubby traveled with about 30 other students to Dinosaur National Monument for a 3 day science intensive.  Unfortunately the husband didn't take any pictures - so I have to bug some of the other adults that chaperoned to see if they have any they can send me.  Bookworm said it was an amazing experience and he learned so much.  Much more than sitting in a classroom reading from a textbook.  A few years ago on this trip, one of our students actually discovered a NEW fossil - it was a huge deal at our school, and made the news and everything!

So to say that my kids have had a fantastic beginning to the new school year would definitely be an understatement.  I'm so grateful that our family is blessed to be involved with so many wonderful people, from those who helped get this school approved and opened, to the wonderful educators and administrators, and our partners in the community who help make these programs possible.  One of my greatest fears as a mother was that my kids would have the same experience with school that I did.  Which was basically so boring that I spent more hours skipping school than attending.  I didn't care about my education, I wasn't engaged, and I can't get those years back to do it over the right way.  This is the reason I got involved with the opening of this school, and the charter school movement in general.  It has been one of the hardest, most time consuming things I have ever done.  But it also ranks right up there as one of the most worth-while and rewarding.

It's too bad that it's really all my kids have ever known, so they don't actually realize how fortunate they truly are.  But I'll take it.
Posted by Xazmin at 10:35 PM

That is sooo cool! I wanna meet him!

It really does feel like the Olympics were just here. It would be fun to host it again.

What a great school!

How awesome is that! So glad they are able to attend such a great school- it really can make a world of difference

That Discovery class sounds amazing!!! What a cool experience. The Dinosaur thing sounds great too. loved going to watch a live dinosaur dig when I was young. So fun!

So, are ya getting a horse?

Yep, I don't know him but don't be surprised by that. I really only know NFL players. But you're right....he's a little cutie and how cool that you get to see an Olympic skater in your neck of the woods! Some gymnast is from Norman Oklahoma where OU is and while I was going there, she was taking classes too. I could not tell you who it was but she's famous. I'm so lame.

I love what you're doing for your kids. GOOD JOB MOMMA!

Macy had horsebackriding too and LOVED it! Austin got into the fishing class. Discovery is one of my favorite parts of the school. My kids look forward to it all week! Let me know when you get that horse. I'll send Mace right over. :-)