Birthdays and Soccer, and Concerts - Oh, My!

I'm coming up from beneath the piles of black and orange, and green and purple tulle to check in with my peeps.
Aside from the Halloween costume making - it's been a fun few weeks.

On the 17th, Hubby and I took Bookworm and a friend to the RSL v. Sporting KC game, followed by the One Republic post game concert.  The tickets were a present for his birthday back in June (the concert was originally supposed to take place after a June match, but the band had to reschedule).  The little punks wouldn't let me take any pictures for posterity's sake.  The bums.  But it was a great night.  Mainly because we kicked trash.  But the concert was good too.  I'm not a die-hard fan by any means,  I mean I probably wouldn't pay to go see them if they were touring, but they sounded great live.  And I do enjoy their songs.

I'm pretty particular with my kids and their activities, and I'm very over just the right amount of protective, in public settings.  Especially when there's a lot of public around.  This was Bookworm's first concert.  Following the game, fans were allowed to come down onto the field for the concert.  All fans had to enter through the north gate.  Since our seats were near the south goal, you can imagine that it took us FOREVER to make it to the other end and down to the grass.  The kids were bummed that we had so many people who got there before us.  I pulled up my big-girl, mama bear panties and told the boys that if they promised to stay together, and then wait for us at the big KFC sign after it was over, they could worm their way through the crowd and try to get closer to the stage.  After the show, I  frantically calmly made my way over to the big KFC sign.  The grin on my son's face made my night, and he said "that was incredible!"  Apparently they made it right up to the stage and had a perfect view.

We won't talk about the next two RSL games.  We just won't.

Today is my sweet, beautiful Cowgirl's birthday.  Her gift was surprise tickets to see Taylor Swift in concert 2 nights ago.  Her first concert ever.  Pixie was also included in the fun, and her ticket is an early gift for her upcoming birthday.  So the three of us, along with my dear friend Kimberly had a fun night rocking out to Taylor Swift.  I think she has some great songs, but the thrill for me was watching me girls excitement for their first concert.  We had high seats, that weren't the best, as you'll see by the video, but it didn't stop them from singing along to every song and having a magical night!  I couldn't help but break away from the action on the stage a couple of times, to take some video of my cuties performing themselves! 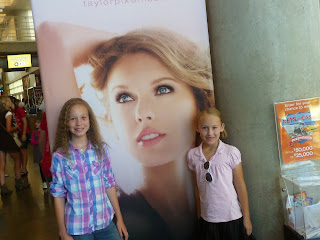 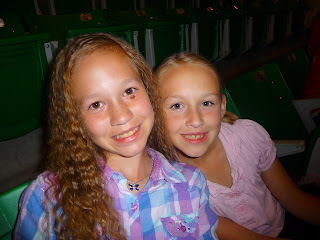 It's been a fun month of family time, and I just thought I'd take a break from costuming to share with y'all!
Posted by Xazmin at 10:05 PM

that is what my kid would be calling you...and i agree. i could easily sit through a Taylor Swift concert. So fun!!

sounds like y'all have been having a blast over there. i can't wait to see the costumes!!

That is so awesome, friend! Your kiddo's will remember these birthdays forever.
You can be my mom right? Never mind we are the same age...

That's great you got to go to her concert. I took my 7 year old to Selena Gomez concert. Such a fun and bonding time between mother and daughter.

What awesome Birthday presents... Concerts, man you are a cool mama! LOVE Taylor Swift! Doesn't she just seem like a great girl!

Looks like a great month! And how brave of you to let them get up by the stage like that- I think the control freak in me couldn't do it.
And that would be a fun concert to go to!

So fun! My girls would be jealous of the Taylor Swift concert. They love singing along to her music. I gotta admit, her songs really are fun to belt out. Sounds like a blast!!

cool! I haven't tried pinterest yet. I've missed your blog. :)