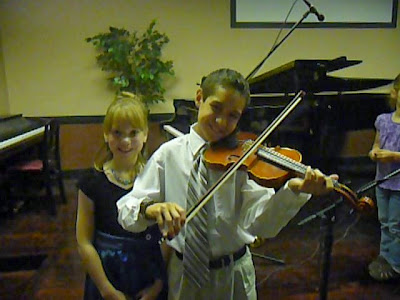 Last month we had a special night in our family. It was a music recital that our 2 oldest children performed in. It was Cowgirl's very first piano recital. She had just started lessons the month before the recital. Her teacher is the same teacher that Bookworm has been taking violin lessons from for the past six years.

During the weeks before the recital she (our music teacher) had been mentioning that she felt it would be good for Bookworm to move on to a more professional violin teacher. She referred us to someone she felt would be good for him, and we knew that this would likely be his last recital under this teacher. So it was a special night. A welcome for Cowgirl and a farewell for Bookworm.

We're so proud of both of them. Cowgirl had only had about 4-5 lessons, and is learning so quickly, and is so dedicated to practicing. Sometimes so much that I kinda wanna take an axe to the piano! But I hope she stays this excited about developing her talent.

Bookworm has actually struggled a little this year with deciding how dedicated he is to his craft. He's lost a lot of his motivation to practice, and for a while my heart was heavy, worried that he may decide to quit.

But last week we went and auditioned for Jack Ashton, whom our teacher had referred us to. When we first arrived there was a young violinist there just finishing up her lesson. She sounded incredible. Mr. Ashton had a serious talk with Bookworm about what it meant for him to take on a student as young as he is, which he doesn't typically do. He (Mr. Ashton) is in demand, and extremely expensive (his price per lesson is more than the entire month's tuition with our previous teacher). He told bookworm that it was a waste of both of their time, and my money if he wasn't willing to be an excellent practicer. He told him to go home and think about it, and for us to talk it over as a family, and if we felt good about his commitment, and our pocketbook, that he would be willing to take Bookworm on as a student.

When we left, Bookworm had a new excitement for developing his talent. He told me that he was so impressed with the girl who was playing when we got there, and he wanted to be able to play that well. He was excited to study under a musician who is a member of the Utah Symphony, and has such an impressive Bio, and musical following around here. The price is going to be difficult for us to swing. But with this new fire for learning and improving that Mr. Ashton inspired in my son, how can we not make this move?

We are a music loving family, and I am so grateful for the gift of music and how it inspires and uplifts. I can usually be found with music playing, anything from classical, to country, to hard rock - depending on my mood. I'm glad that so far my kids are deciding they want to develop their musical talent, and hope and pray they continue working at it!

Wow, they both sound great! I think it's wonderful that music is such a big part of all of your lives. We love music here too, though we mostly dance to it ;)

Congrats to both of them..

I am so impressed with both of your children and their talents...wow! ALSO...I have been listening to Due West and did not even realize it. They do a song about being faithful....when on the road...and it shows video footage of them roasting marshmellows with family...I LOVE THAT SONG!

You have talented kiddos girl!
I'm glad he got his inspiration back.

That is awesome... They both did great! I'm wanting my boys to take lessons. I may start with piano this summer...depending on if we can afford it!

Ah-MAZING!!! Great job to Bookworm and Cowgirl! I always wanted to learn how to play both of those instruments, so I'm mildly jealous. Okay, maybe medium-ly jealous. Around here, we're only as musical as the radio (and church choristers) will take us...

I think music is important and it's amazing that you are so supportive of your kids' talents! You are a great momma!

They are so talented! It's so great that they like music and are excited to learn. My kids also love music and playing instruments. I really think it goes along with helping excel in school. That is great!

wow! that is so special! I wish I had stayed with the piano...good for bookworm sticking with such a beautiful instrument and to dedicate himself to such a special talent.