The Girl With the Headache - part 1

One year.  It was one year ago today that my oldest daughter walked away from a church dance with a headache that would completely change her life.  That's not where it all began though.  It began long before then, with a girl who had a passion for soccer, and an extremely competitive nature.

I haven't posted much on social media, or at all on my blog about her situation.  I don't like to publicly dwell on and lament about my family's trials.  I don't want to seem like I'm fishing for sympathy, or like I'm needy.  Maybe I'm just too prideful and don't want to seem weak.  Also, I know of others who are going through far worse trials and I feel guilty talking about ours.  But enough people know bits and pieces of her story and wonder what exactly is going on, so I thought it was time to get it all out there.  Perhaps her story will reach someone else who is going through a similar trial and help them feel less lonely.  And it will be good to have it all recorded to look back on when this is all over.

Ambria was my athlete.  Of all my kids, including my son, she is the one that took to playing sports.  And from an early age her sport of choice was soccer.  Oh how she loves it.  And over the years she became quite the soccer player, if I do say so myself.  She's also very competitive, and fearless.  This combination can lead to trouble when you're a pre-teen playing co-ed soccer.  That's the time the boys start surpassing the girls in size and strength. 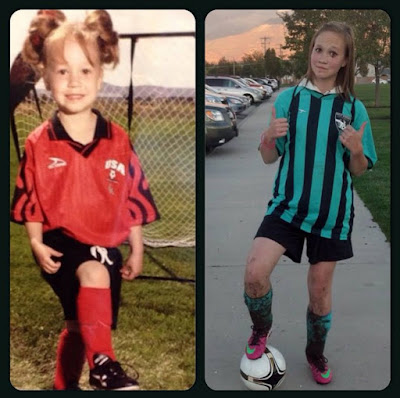 It was a beautiful morning for a soccer game.  The sun was shining, and the wind that often pestered the young players and their adoring fans was absent.  Ambria was playing some of her best soccer to date, and her team was up, with the end of the game near.  That's when Ambria and a boy from the opposing team both went full steam ahead for the ball.  He beat her to it and kicked with his full force.  She was just seconds away from reaching the ball from the opposite direction, so you can imagine the force of the impact when the ball hit her square in the head.  It snapped her head back and laid her out flat.  The game went on briefly, but time stood still for me, as I waited for her to get up and walk it off.  Only she didn't.  The ref halted play and I couldn't get to her fast enough.  When I reached her she was still on her back, her coach and players from both teams huddled around her.  It took several minutes before she was able to sit up, then stand and be helped off the field.  She walked off the field to applause, but she didn't hear any of it.  She wasn't aware of anything around her and we barely made it off the field before she sank back to the ground, unable to walk further.  We hadn't reached our family or our team, but she needed to stop.  We sat there, her resting and drinking water, until the game ended.  As we made our way to the car, it was clear to her dad and I that we needed to head to the ER instead of home.  It was, of course, a concussion, and she had a hard time counting, as well as reading sight words without having to sound them out. There were more tests, I can't remember them all, but she was told not to read, or watch TV or do computer work or homework or anything to stimulate her brain as long as she was feeling dizzy or headachy at all.  She was not to return to sports until she went 10 full days with no concussion symptoms. It was a long couple of weeks for her, but her symptoms went away fairly quickly, and finally she was able to get back to her regular activity.  Then, her first time playing soccer at recess, she took another ball to the head.  It wasn't nearly as hard but still did some damage, since she had just recovered from a concussion as it was.  Over the next 10 months she suffered 2 more concussions for a total of 4 concussions in 12 months.  She missed the end of her soccer season, but recovered relatively well.  Life got back to normal, although she occasionally got headaches in the car, or a little dizzy on amusement park rides.  She continued to play soccer over the next season and 1/2.

Ambria was attending a church region dance with some friends.  I got a message near the end of the dance that she had a horrible headache.  She had to be helped out to the car by her friend whom we were also giving a ride home. She had suffered a similar, extreme headache a few days prior after being spun on a hamster wheel toy at a local playground, but it went away after some rest.  Not this time.  She spent the next week curled up in bed or on the couch, in pain.  It was a debilitating pain that kept her from attending church or school.  We were able to get her into a headache and migraine specialist where she was diagnosed with Post Concussive Syndrome with chronic daily migraine.  Basically everything in her brain was mis-firing and causing the symptoms.  It was a relief to know that it wasn't something life threatening, and we expected things to get better with some treatment and a little time.

That week stretched into a month.  Then 2 months.  Then more.  There was never a waking moment that Ambria wasn't in pain.  She missed excessive amounts of school and church.  And the emotional toll it took on her was harder for this mama to watch than even the physical pain my girl was in.  She made such a valiant effort to stay positive, be grateful for her blessings, and put on a brave face for others, but she began to feel very isolated and disconnected from her friends at school.  She has always been outgoing, active in everything, and very involved with what was going on.  Now she was missing out on all the fun activities that go along with attending a school like ours, that focuses on experiential learning.  She wasn't able to go out with her group of friends anymore, to the park or the mall or the movies.  Life at school was moving on without her.  She was very discouraged and lonely and it broke my heart to watch. The pain medicines prescribed did nothing to ease her pain.  But there were rare times when the intensity of her migraine was lower and she was able to push through the pain and make it to school or to church.  She also started having struggles with her cognitive skills.  It was hard for her to focus.  She often got dizzy, lost her balance, or had brief vision blackouts.  She would start a sentence and then lose her train of thought and not remember what she was trying to say.  It was scary and frustrating for her, at 14 to feel like she was losing her ability to concentrate and communicate fully.  We learned the triggers that would cause her pain to increase (car rides first and foremost, then bright light, especially sunlight, then lack of sleep and not eating frequently enough).  Car rides and sunlight are impossible to avoid, but we did our best to adapt and try to make the situation as bearable as possible. Still, she basically felt like she was missing out on life.  Were it not for the amazing support and friendship of a kind-hearted boy who has been by her side through everything, I'm not sure how well she would have endured those last months of school, and into the summer.

As more time went by, she seemed to be making small improvements.  The times her migraine was at the highest pain level seemed to be less frequent throughout the day and not last as long.  And the times where the pain was lower seemed to be more frequent and last longer.  It helped me have hope that there was a light at the end of the tunnel.  Still, there was never any time during the day or night (unless she was sleeping) that she wasn't in a great deal of pain, and she became increasingly disheartened and frustrated.  She cried easily and often - which led us to discover that another big trigger for her pain intensity was crying.    It gave new meaning to the term "crying headache."

Spring soccer started and when the pain wasn't too intense, we went to the soccer fields so she could support her team from the sidelines. She felt that it was something she should do, but I hated watching her heart break each time her team took the field without her.  The season progressed, but Ambria's recovery didn't.  To add insult to injury, it was determined that she should not play soccer anymore, even if she recovered completely from her symptoms.  Losing soccer for good has probably been the hardest thing for her to accept in all this.  This is a picture from the second to last game of the season.  She cried throughout and I could do nothing to help her heart. 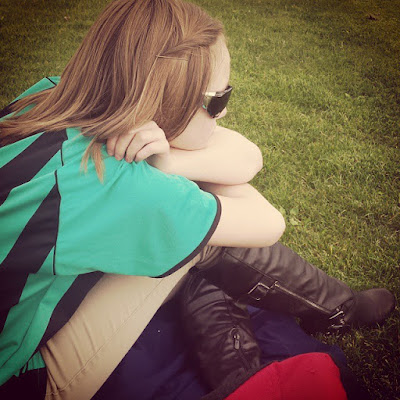 She attempted to attend the final camp out of the school year, but the ride up the canyon and being out in the sun was too much for her and we had to bring her home after the first night.  She was so angry at missing out on the last outdoor experience with her classmates before school ended, and many of them moved on to different schools.

Over the course of these painful months, we were not without blessings from our Heavenly Father.  And how grateful I am for the times we were granted tender mercies that gave hope and comfort, and helped renew our faith. There are three times in particular that especially stand out in my memory.  As this post is already extremely long, I'll save them for next time.

oh my gosh, I can't even imagine how awful and hard that would be. So sorry. Scary too for me since Alex plays soccer.

Oh wow. I'm so sorry for her and for you. I can't imagine how difficult this has been.

I pray and wish for a good healthy life for this wonderful young woman. Ambria is an amazing girl with a lot of talents. Just leave soccer alone. Pres. Bailey