Proud of my Girl

I wanted to link up with Emmy and Kmama's PMM last Thursday, but I just couldn't seem to fit in the computer time to get it done!  Better late than never though, right?

Thursday was the Salt Lake Valley Science and Engineering Fair.  It was the Regional Science Fair for those who had advanced past their school science fairs, and then their district science fairs as well.  My Cowgirl was one of those students and I was so proud of her.

She did a really fun project that was called Font and Impact of the Written Word.  She tested 50 subjects on their memories of a list of words.  Different subjects were given the list typed up in different fonts, and then tested on how many of the words they remembered.  The object was to determine whether font type affected how easily someone remembered what they had read.  She had a great time doing it, and thanks for those of you who helped her reach her quota of 50 subjects!  You know who you are.  So what do you think?  Did people whose lists were typed up in a simpler font remember more words, or was it the people whose lists were typed in more busy/fancy fonts?

She's disappointed that she didn't place, or move on to Nationals, but I told her that I couldn't be more proud.  Plus, to be honest - I'm not sure I have it in me to bear with her through another round of revisions to her display board!  And I KNOW my wallet doesn't have another round in it!

Hubby couldn't get a great picture because they placed her right in front of a window (although she did enjoy the view of the football stadium at the U.  The team was practicing!).  Sorry Emmy - wrong team I know - but you take what you can get when you have to stand by a table for 4 hours waiting to be judged! 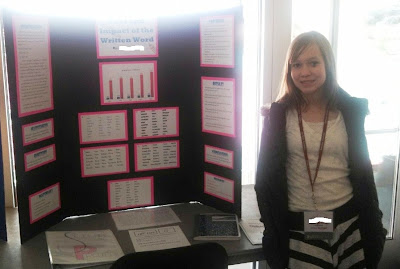 It was a great experience for her, and I'm so grateful she had the opportunity.  But I sure am glad not to have to worry about Science Fair again for another year!

So so awesome she did so good! That is awesome. And what a very fun project idea. So what was the result? What font is the best for remembering?

And hey it's okay to watch the other team practice as then you can learn their secrets ;)

Thanks so much for linking up

Science fairs sound like a lot of stress but like something that's totally worth it in the end and this one proves my point! Sounds like a whole lot of fun, awesome blog update!

What a great accomplishment to even make it to Regions. My kids never made it in the classrooms for Science Projects. We just don't do Science, period. LOL.

Congrats to her! I know she worked hard on it!

That is so great. What a hard worker! I hope she's proud of herself.

Wow, what a neat project. She is beautiful, and I hope wasn't too disappointed. Still, it is such an honor to be able to present at regional. What an accomplishment!